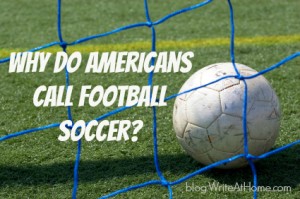 The U.S. plays Germany today in an important World Cup match. That means I’ll be out of commission this afternoon watching the game.  It also means I’m contemplating the word soccer and why we seem to be the only country in the world that doesn’t call the game football. It certainly seems to be an appropriate name. I’ve thought it would make more sense to call soccer football, and what we call football something like tackleball or smashball. But no one’s asking me.

The irony is that the English were the first to call the game soccer. While we were killing each other during our Civil War, the English were being far more productive, establishing the first official rules of football, and forming what came to be known as the Football Association.

Soccer is a colloquial abbreviation of association, derived from the second syllable of the word. Some believe it was first shortened to assoccer and later to the simpler soccer.

This part is only legendary, but many have it that sometime in the 1800’s a certain schoolboy named Charles Wereford-Brown was asked by some Oxford friends to join them in a game of rugger (rugby). He supposedly replied that he’d prefer a game of soccer. The name stuck, and there you have it. I like that story. I think I’ll go with it.

What’s important to remember here is that soccer is not a crass Americanism. The word is part of the rich history of the game, and supposed aficionados who denounce it only reveal their own ignorance.