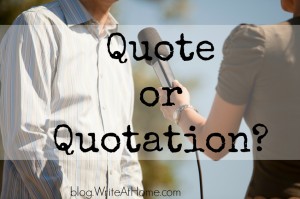 The use of quote as a noun bothers many grammar purists. Quote, they insist, is a verb; the noun form is quotation. Thus, a sentence such as, “Can I get a quote for tomorrow’s paper?” is likely to raise some hackles, get up some dander, and twist some knickers.

As you might guess, I think that reaction is silly.

I’m all for using quote as a noun unless the writing is formal and apt to be judged by twisted-knicker types. Here’s why I think it’s okay.

Quotation Is a Long Word

Quote is tight and clear. Quotation is longer and therefore unnecessarily formal in most contexts. English tends to grow simpler over time. It’s a normal progression.

Taximeter cabriolet has been replaced by taxicab, taxi, or cab. Veterans are commonly referred to as vets. Influenza is flu. Gymnasiums are gyms, airplanes are planes, and telephones are phones. Nouns get abbreviated. Why none of these bother people like quote does is beyond me.

There’s no fear that readers or listeners will be confused by using a word alternately as a noun and a verb. We do that with many common English words: play, love, ride, smell, run, talk, smile, laugh, etc. Context makes the usage clear.

According to Richard Nordquist, the first recorded use of quote as a noun was in 1888. That was 126 years ago.

The fact is, that is precisely what makes grammatical and lexical usage right. Words and phrases work their way into the language all the time. Some stick and become natural to the majority of English speakers. Eventually, dictionaries and style guides accept the usage as normal. This clearly seems to be the case with the noun quote. The table below shows the usage of quote as a noun in English publications compared to quotation. Notice the trajectory?

Keep in mind that this only reflects the use of quote as a noun in books. In everyday speech and journalism, the use is much more common. Quote is increasingly used as a noun. Why fight it?

Every dictionary I found listed the noun version of quote. Some of them described it as informal, but not all. Some included notes recommending the use of quotation in formal writing. That’s what I also recommend.

I am willing to bet that many younger readers find it surprising that anyone would object to the noun-use of quote. That’s just another indication that its universal acceptance as standard is inevitable. Apparently that hasn’t happened yet, so I recommend caution in weighty and formal writing situations. In all other situations, feel free to use quote as a noun and ignore the occasional objection.

I’d love to hear your opinion on this. Leave you comments below.