5 Common Problems with Comparatives and Superlatives 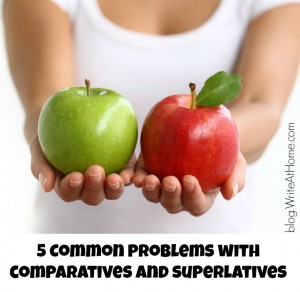 Confused:       Between Larry and Moe, Moe is the meanest.

Incorrect:        That was my most happiest moment.

Incorrect:        This restaurant is more better than the other.

Unbalanced:  This coffee is better than the shop on main street.

Illogical:          Greg was more trustworthy than any student in class.

Logical:            Greg was more trustworthy than any other student in class.

When making negative comparisons, use the adjectives less and fewer. Increasingly, these words are used interchangeably, but the traditional standard usage makes a distinction that you should at least be aware of.

We love comments. Please leave yours below!