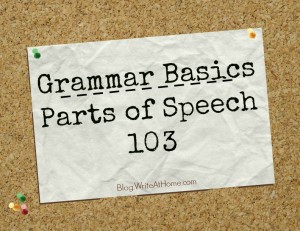 We’ll wrap up our whirlwind tour of the eight parts of speech in this post.

So far we’ve covered nouns, pronoun, and verbs in the first post and adjectives and adverbs in the second.

Let’s get to the last three: conjunctions, prepositions, and interjections.

A conjunction is a word that connects words or parts of a sentence.

There are three kinds of conjunctions, but we’ll begin by looking only at the most common – the coordinating conjunction.

The most common conjunctions are and, but, or, and nor.

A preposition is a word that shows relationship between words.

A preposition can show where something is located (in, on, near, over), the direction it is moving (to, around, through), or when it occurs (after, until, during).

Some of the most common prepositions include the following:

Interjections are easy to spot, but difficult to explain. They don’t have a real definition, and they don’t relate to any other words in a sentence grammatically. They often show strong emotion, like Yikes! Wow! and Yipee! Sometimes they indicate just a mild exclamation, like well, no, and oh. Interjections are often set apart from sentences with exclamation points:

Milder exclamations are set off by commas:

Interjections can be fun, but be cautious about using them in formal writing. They are normally reserved for informal writing and dialogue.

And that wraps up our first look at the parts of speech. We’ll come back to them in later lessons, because we only covered the simplest examples of each. If you can identify these, however, you are well on y0ur way to conquering the challenge of English grammar.

Test your understanding with the quizzes below: (COMING SOON)

Identifying the parts of speech 103

Please leave your comments below.