Search
Home / Blog / How Not To Argue: Tu Quoque 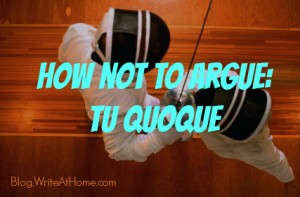 An atheist friend of mine recently posted an article on Facebook that listed ten things Christians say that offend atheists. I read the article and took note so that I might avoid being unwittingly offensive. But this friend also regularly posts statuses designed to demean and insult Christians. I suggested in the comments  of one such status that this was hypocritical.

Here’s how he responded¹:

For the record I don’t deride “other sects of Christianity.” I don’t know where he got that idea. But that’s not the point here. I just want to talk about his tactic for arguing. It’s a common informal fallacy known as tu quoque — Latin for you also.

I’m not suggesting my friend strategically created a tu quoque argument. I’m sure he wasn’t intentionally avoiding the topic at hand, but that’s exactly what a tu quoque does. It’s a type of red herring argument — one that draws the opponent off the logical path onto a side route.

Let me clarify. I was seeking to demonstrate to my friend that his behavior on Facebook had been hypocritical — that he was asking people not do to him precisely what he was doing to others. I might have expressed it in a syllogism:

Major Premise: All who hold people to standards they don’t  hold for themselves  are hypocrites.

Minor Premise: You hold people to a standard you don’t hold for yourself.

Conclusion: Therefore, you are a hypocrite.

1. Show the Argument To Be Invalid

There are two logically legitimate ways to argue the truth of the conclusion. One is to show that the argument itself is invalid. In other words, you have to show that, assuming the two premises are true, the conclusion does not necessarily result from them.

Here’s an example of an invalid argument:

Some Christians are hateful.

Brian Wasko is a Christian.

Even though the two premises are true here, the conclusion cannot be logically deduced from them (in this case, because of the word “some” in the first premise). There are numerous ways to create invalid arguments, by the way. This is just a simple and obvious one.

2. Show a Premise To Be False

That’s not true with my syllogism, however. It is a valid argument. If the two premises are true, then the conclusion must follow. But since it is logically valid, the only way to argue it is to deny the truth of one of the premises. If either can be shown to be untrue, the conclusion can be denied.

It would be hard, however, to deny the definition of hypocrisy given in the first premise, and there was adequate evidence of the second premise on his Facebook page. So, instead of addressing the charge, he turned the tables on me. That’s how you do the tu quoque dance. We all see it every day:

Mr. A: You ate the Snickers bar I was saving!

Mr. B: Well, you ate all the ice cream last night!

Ms. Y: Well, you Republicans lied about WMDs in Iraq.

The strategy behind tu quoque is to bring into question the character of your opponent, thereby casting doubt on his assertion. In the sense that it attacks the arguer, it is also a type of ad hominem. Because it also avoids the argument and creates an altogether new one, it is a red herring.

Using a tu quoque is often effective at putting an accuser on the defensive. That’s what I mean by “turning the tables.” Instead of denying the accusation, just make a counter accusation and hope your accuser takes the bait and starts defending himself — leaving you scot-free.

Understand this, though. It’s not necessarily wrong to point out someone’s hypocrisy. Just be aware that if someone calls you a fool, telling them they are a fool too isn’t the same as proving you are not a fool. In fact, it’s a tacit admission.

¹To his credit, my friend (who shall remain nameless) did actually admit to being hypocritical, then proceeded with the tu quoque as a sort of defense. Perhaps he felt he had already conceded my assertion and was simply going on to make a counter-attack against me. That’s possible to do without any fallacious reasoning. But all that just complicates things. The point is, I accused him of hypocrisy, and instead of addressing the accusation, he tried to turn the tables on me. That’s a pretty good example of tu quoque.

If you have any comments or questions that you’d like to leave, please be my guest. Use the Reply area below.

The One Blog Post I Really Want You To Read
Watch Your Words: 5 Lessons To Learn from Phil Robertson and Justine Sacco