Do Continual and Continuous Mean the Same Thing? 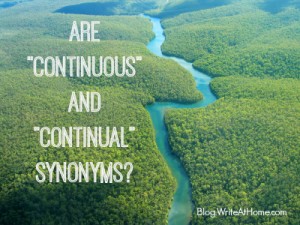 A Facebook fan recently asked me to solve a usage disagreement regarding the words continual and continuous. Are they synonymous and interchangeable or not?

As is so often the answer in situations like this — yes and no.

They Mean the Same

According to the OED, both words derive from the Latin continuus, and both meant “continuing without interruption” when in their earliest known published use.

At some point, however, scrupulous writers decided it would be better to differentiate the two words. It was decided that continuous was to retain the “continuing without interruption” meaning and continual would mean simply “regularly recurring” or “occurring again and again.”

For instance, if overhead electrical wires near your home make a constant, uninterrupted hum, you would say the noise is continuous. If, however, the nearness of the wires causes your power to cut off on a regular basis, you would say  you experience a continual loss of electricity.

This delineation of the terms seems useful to me. Unfortunately, the general population couldn’t ever quite get the hang of the difference — the words are quite similar after all — and the usage was perpetually muddled. Both words continued to be used to mean “uninterrupted.” Nice try though, grammar gurus!

Modern dictionaries now all agree that both words mean “incessant” or “continuing without interruption.”

So, to sum up, the words were originally synonymous, evolved into somewhat distinct terms, then devolved back to synonyms again.

They Are Not the Same

Grammar Nazis, of course, still like to insist on the distinction between the words, despite what the dictionaries say. And in fact, several dictionaries do recommend using only continuous to mean “without interruption.” Merriam-Webster includes this note in its entry for continual:

So, M-W acknowledged that the denotation of the words may be the same, but they imply different meaning — particularly to those who have been taught that there’s a difference.

One way the words clearly differ is that continual only ever refers to time, whereas continuous can refer to an uninterrupted extension into space or substance:

You shouldn’t use continual in either of these contexts.

Keeping the definitions distinct seems useful to me, as there could be a meaningful difference between saying the noise coming from my neighbor’s apartment is continual rather than continuous. But it doesn’t matter how useful I think it is; the reality is that people use the two synonymously and pretty much always have. This is one of those situations where linguistic elites have made a good case, but it just didn’t stick. They were unable to get the mass of English speakers to keep these words in their neutral corners. And ultimately, it’s the masses who decide how words get used, not the experts.

All this means you can do what you like with continual and continuous. Feel free to use them according to their separate definitions, but be aware that you are likely to be misunderstood by some, and you cannot justly blame them –dictionaries have gone over to their side. (Notice I didn’t say “the dark side.”)

Note: Everything I have written applies equally to the adverb forms of these words: continually and continuously.

I am continually amazed at the comments I get on this blog. Please add your thoughts in the reply section below.