Search
Home / Blog / Words That Are Their Own Opposites: Contronyms

Words That Are Their Own Opposites: Contronyms 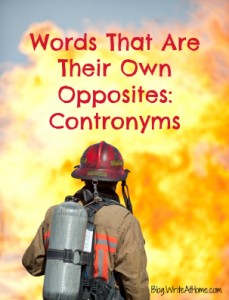 I immediately thought it was weird when I learned that flammable and inflammable mean the same thing. I get it now: inflame  means “to burst into flame,” so inflammable means “liable to burst into flame.” But that in- at the beginning just looks so much like a negating prefix–like in injustice, indivisible, inactive, inattentive, inadequate, etc–that it seemed crazy the two words aren’t opposites.

But contronyms are even weirder. The word contronym is a recently coined neologism. It refers to words that have definitions that are opposite of one another. There are words–common ones, mind you–that mean the opposite of themselves in certain contexts.

The verb dust is a good example. If I dust some shelves, I remove whatever particles are on it. But if I’m a farmer and I dust my crops, I put particles on them. Here are some other examples. Notice that some are less clearly opposites than others:

Again, some of these require a bit of a stretch, but they are still unquestionably opposites in some sense. Just another oddity of English.

Your comments are always welcome. Feel free to leave a reply below.