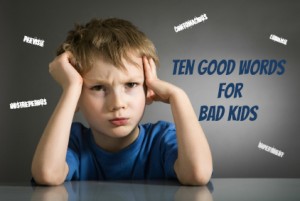 The words below don’t necessarily relate to children, but they are the kind of words used by adults in Charles Dickens novels to describe miserable orphans. If you happen to be a young person and any of these words describe you, please stop. Modify your behavior  immediately.

If you are a parent and any of these words describe your children, you have my sympathies. But your family will not be invited over any time soon.

If you are a prospective babysitter or nanny and any of these words are used to describe the darlings during the initial interview, I strongly suggest you look elsewhere for employment.

If you are a teacher, I recommend you use these words with your students whenever appropriate. It may not correct their behavior, but you may at least improve their vocabulary.

*Quotations are via Dictionary.com.

Originally, impertinent meant not pertinent, or irrelevant, but that meaning has all but disappeared. Now it just means “rude.”

“I don’t think it is given to any of us to be impertinent to great religions with impunity.” ~John le Carre

Recalcitrant means “stubbornly unwilling to obey authority.” A recalcitrant child is difficult to deal with and not inclined to obey.

“The faces of most American women over thirty are relief maps of petulant and bewildered unhappiness.” ~F. Scott Fitzgerald

A peevish person whines and complains constantly. Jane Austin uses it in Pride and Prejudice:

“[T]he luckless Kitty continued in the parlour repining at her fate in terms as unreasonable as her accent was peevish.” ~Jane Austin, Pride and Prejudice

Insolent and impertinent are synonyms. They are fancy ways of saying insulting, rude, or cheeky.

“The tops of mountains are among the unfinished parts of the globe, whither it is a slight insult to the gods to climb and pry into their secrets, and try their effect on our humanity. Only daring and insolent men, perchance, go there. Simple races, as savages, do not climb mountains,–their tops are sacred and mysterious tracts never visited by them.” ~Henry David Thoreau

Contumacious and recalcitrant are synonyms. They mean willfully disobedient, rebellious.

One who is insubordinate, like the recalcitrant and contumacious, refuse to be placed under authority.

“Curiosity is insubordination in its purest form.” ~Vladimir Nabokov

Obstreperous means “loud and unruly; boisterous.” An obstreperous child is resistant to restraint or control.

“A lunatic may be “soothed,”… for a time, but in the end, he is very apt to become obstreperous. His cunning, too, is proverbial, and great…. When a madman appears thoroughly sane, indeed, it is high time to put him in a straight jacket.” ~Edgar Allan Poe

When told by sports announcer Howard Cosell that his behavior was “extremely truculent,”  Muhammad Ali once replied, “Whatever truculent means, if it’s good, I’m that.”

Churlish means rude (like a churl or peasant). It also implies being difficult or unpleasant to deal with.

“He is valiant as the lion, churlish as the bear, slow as the elephant.” ~William Shakespeare, Troilus and Cressida

“A good soft pillow for that good white head
Were better than a churlish turf of France.” ~William Shakespear, Henry V

If you have something to say, leave it in the Reply section below. Just please don’t be peevish, petulant or churlish.

How Not to Argue: Non Sequitur
Why You Should Never Assign a 500-Word Essay