Search
Home / Blog / How Not to Argue: Non Sequitur 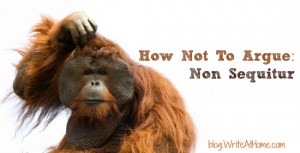 This post is part of a series on logical fallacies. For others in the series, check out the Logic and Argumentation section of our Resource Library.

One year I was assigned to “teach” 3-year-old Sunday school at church. Teach is in quotation marks because I soon learned that not much real teaching is possible with that age group. My background had been in high school education, and, well, I was terrible with 3-year-olds.

It was a week before Easter Sunday, and I thought I might generate some interest with a simple question:

“Who knows what next Sunday is?” I asked.

“Come on. It’s a special day that we celebrate every year. Anyone?”

Finally, Andrew raised his hand. “Andrew! My man! What is next Sunday?”

“That is an excellent example of a non sequitur, Andrew. Thank you.”

To this day, I don’t have the foggiest idea what Andrew was thinking. I can guess what character trait his parents were working on at the time, but how he got from Easter to pride, I’ll never know.

Non-sequitur is Latin for “it does not follow.” In everyday communication, it means a statement that is disconnected from the previous one. Like conversations I have with my wife when I’m not really paying attention (hypothetically, of course):

My wife: Honey, did you hear that Susan’s mother, Gabby, is expecting twins?

Me: I think I forgot to pay the gas bill this month.

In argumentation, however, non sequitur refers to a conclusion that cannot reasonably be deduced from the premises. It’s a broad, catch-all kind of term for a variety of specific logical fallacies. One example might be:

The conclusion might even be true, but if it doesn’t logically follow from the premises, it’s still a non sequitur. A lucky guess, maybe, but a non sequitur:

I have illustrated this concept using syllogisms (a logical proposition expressed as two or more premises and a conclusion), but they are common in all kinds of everyday arguments and debates. All of the following are non sequiturs because the conclusion doesn’t follow logically from the previous statements.

In future posts, I’ll talk about some more specific kinds of non sequiturs, but it’s a good, broad term to understand.

As always, I covet your comments.