Complacence or Complacency and Similar Cases 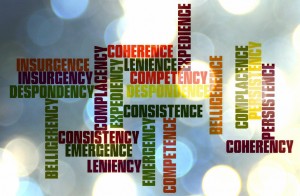 English uses a number of suffixes to denote nouns. I like to call them nounifiers. They transform an adjective or verb into a noun. Common nounifiers include:

There’s no right version. They are equally correct options, though there are subtle and barely discernible differences in meaning. That doesn’t mean, however, that one isn’t preferred over the other in usage. A quick look at Google’s N-gram viewer (which provides comparative data on word use across a large body of published works going back to 1800), shows that expediency is more common than expedience, though the gap has narrowed and both words have become less frequent over time:

The trend looks almost identical for despondence vs. despondency:

Coherence, on the other hand, has grown more preferred to coherency over time:

And some words reversed in preference at some point. Competence surpassed competency around 1890:

As this type of word arises in your writing, I suggest you take a moment to look up each option and select the one that best represents your meaning rather than simply choosing the one that seems most familiar.

Here’s an incomplete list of words that use both -ence and -ency suffixes:

Please leave any questions or comments in the Reply section below.