When I was in school, it went like this: 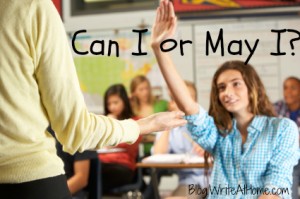 Me: Can I go to the bathroom?

Teacher: I don’t know, can you?

Me: I mean, may I go to the bathroom?

When I taught high school English, I was slightly more creative.

Me: Why are you asking me? Don’t you know?

Me: Probably. Most people do it several times a day.

Me: This is a trick question, right?

The idea was the same — use humor to teach the difference between can and may. Well, humor and a little humiliation. I did it because it had been done to me, and I assumed the can/may distinction was important. Can is about ability and may is for asking permission. But is the distinction really that clear? Or that important?

Regular readers here probably can see this coming: Language changes. Grammar rules grow fuzzy and sometimes disappear altogether. New words get coined while others fade and vanish. The use of can to ask for permission is an example. Merriam-Webster lists as a second definition for can, “have permission to.” It also includes the following note:

The use of can to ask or grant permission has been common since the 19th century and is well established, although some commentators feel may is more appropriate in formal contexts.

In other words, it wasn’t my generation that began asking “Can I go to the bathroom?” Using can to ask permission has been common for more than a hundred years in both spoken and written English. It’s time to admit that popular usage has wrought a change here.

Now, don’t get me wrong. I don’t like it. I think may is a useful word. It avoids potential ambiguity for sentences like “Can I climb this ladder?” Is the speaker asking about possibility or permission? Restricting permission to may makes things tidier.

So, I will do my best to continue to differentiate can and may. I will continue to recommend that students stick to the distinction in formal writing as well.  But I think I’ll just let kids go to the bathroom without any hassle.

By the way, can’t is almost always preferred to the ungainly mayn’t, regardless of meaning.

If you have any comments, you may leave them below. If you can.

Categories: Grammar and Usage Tags: can I may I, can or may, grammar, language, usage

50 Subordinating Conjunctions and Why They Matter
Getting Personal