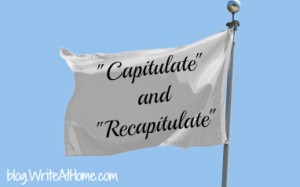 I’m always meeting people who are frustrated by the complexity and apparently irrational nature of English. It drives them crazy that rules like “i before e, except after c” have so many exceptions and that there seems to be no rhyme or reason to how plural nouns are formed.

I take a different perspective. The goofiness and unpredictability of English is what makes it fun and interesting to me. I like spotting and exploring the nutty parts.

I’ve been looking at SAT words recently, and one inspired some of that investigation. I learned that the word capitulate means “to surrender; to give up.” That, you would think, would make it easy to define the related word recapitulate. Everyone knows that the prefix re– means “again.” So, to recapitulate must mean “to surrender again,” or “to give up for a second time.”

Uh, no. Actually, recapitulate means “to review in a summary way; to summarize briefly.”

Say what? How can two words that seem so obviously related have such disparate meanings?

They both have the same Latin root: caput, which means “head.” That word evolved into capitulum, which means “title,” “chapter,” or “heading.” That then morphed into the verb capitulate, which originally meant “to list or summarize according to headings” and was most often related to contracts or articles of agreement. Interestingly, our man Shakespeare coined the term in Henry IV. He used it to mean “enter into parley,” but the word later became more specifically associated with concluding a formal agreement, and, by the end of the 17th Century, still more specifically to “agree to surrender.” That’s basically what we mean by it now.

Unlike capitulate, recapitulate pretty much stuck to its original meaning: “to review by headings — in a brief, summary way.”

So, I guess we can blame this confusion on Shakespeare.

Leave your suggestions and comments below!

Use Similes, But Avoid Cliches
What Is Purple Prose and Why Should I Avoid It?