What Is Camel Case? 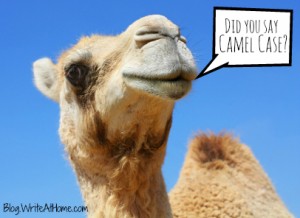 I still remember the day I thought of the name WriteAtHome. I dreamed up the business idea while running on a treadmill at the YMCA and wondered what kind of name would cleverly communicate the idea of a tutorial writing course focusing on home learners. One of my first thoughts was Write at Home, with it’s punny play on words. I liked associating an educational program with the expression “make yourself right at home.”

To my surprise, the domain name was available and I snatched it up. When it came time to register the business, I decided to mash the words together so that people would more easily recognize it as a web address. But writeathome is hard to read, so I capitalized each word: WriteAtHome. That’s better. What I didn’t know then, but — thanks to Facebook commenter, Jason — I know now, is that this mashing of words and unorthodox capitalization has a name: camel case.

According to Wikipedia, there is some disagreement about whether words in camel case can begin with a capital letter, but I’m getting the feeling that it doesn’t really matter. Words written like that look humpy, like a camel. I like it.

The name camel case (or CamelCase) came out of the world of computer coding, but the idea has been around. You see it in names like McGregor, DiCaprio, or LaBron. Mine is not the first company to do it either; MasterCard, WordPerfect, and PowerPoint have been around much longer.

So there you go — a new term to add to your collection. Thanks for dropping the knowledge, Jason.