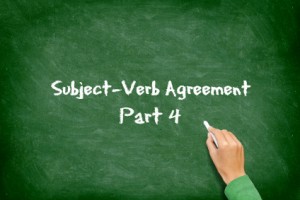 This is the final post on that grammatical bane, subject-verb agreement. To review the basic concepts in previous posts, you can check out Part 1, Part 2, or Part 3. Like this one, all three include free online quizzes to test your knowledge.

Remember, verbs should agree in number with their subjects. This is easy enough in typical, simple sentences. But not all sentences are typical or simple. Below I discuss some particular situations that make subject-verb agreement complicated. 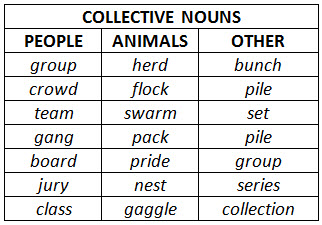 Collective nouns are particularly tricky because they can be either singular or plural depending on context. If the group is acting together as unit, use a singular verb. When the group are acting as separate individuals, however, the plural verb is preferred.

Collective noun as a unit:

Note: In ordinary daily usage, the singular verb is almost always preferred with collective nouns. This is one of those areas where there is debate about who sets the rules — textbooks and grammar experts or ordinary speakers and writers of English. Few people would correct you for saying, “The sales staff receives their paychecks on Friday.” But if you are writing formally, you might use the more “correct” plural verb in this case because the staff are acting as individuals.

Most sports teams are plural: the Eagles, Pirates, Cubs, Red Wings, Lakers, etc. For this reason, writers have taken to using plural verbs with them.

Some disagreement has arisen, however, about a handful of teams that have a singular name, such as the Miami Heat, Orlando Magic, and Colorado Avalanche. Some sports writers use plural verbs to maintain consistency: The Jazz are suddenly slumping. Others think it’s more natural to treat these names as singular: The Heat is a favorite to repeat as NBA champs. Because opinions are divided, we suggest going with what sounds best to you.

Band names are treated as singular or plural depending on the name. Plural names (e.g., The Beatles, The Killers, The Flaming Lips) take plural verbs and singular names (One Direction, Fun, Switchfoot) take singular verbs. Thus, you would say The Rolling Stones are old and U2 is awesome.

With fractions and percentages as the subject, look at the noun in the of phrase — the object of the prepositional phrase that is likely to follow it. If the noun is singular, use a singular verb. If it is plural, use a plural verb. In other words, the number of the verb depends upon what the fraction or percentage is of.

Titles of book, movies, and music are always treated as singular.

When talking about sums of money, periods of time or measurements of distance, use a singular verb. This may seem counter-intuitive at times as these measurements seem to be in the plural.

As complicated as subject-verb agreement rules seem to be, native speakers of English have an ear that can be trusted in most cases. Fortunately what sounds right is most often the standard, accepted usage. Still, it’s a good idea to learn about these pesky exceptions.

Think you’ve got it down? Take the quiz below and find out! 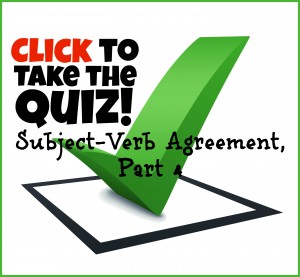 4 Pronoun Mistakes To Avoid
A Pandemonium of Parrots: Collective Nouns for Animal Groups