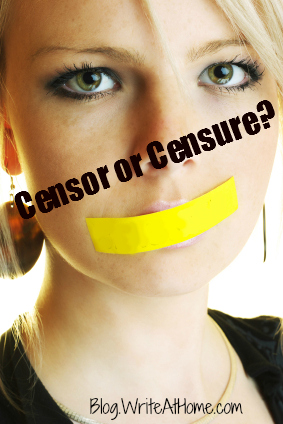 Here are two words that are easy to confuse: censor and censure. Let’s try to get them straight.

They are not homophones exactly because they are subtly different in pronunciation. The key is the s in the middle. In censure, it’s pronounced sh like in the word sure. It’s pronounced like a standard s in censor.

Both words have a noun use and a verb use. A censor (noun) is an official whose job is to examine material for publication and eliminate objectionable matter.

To censor (verb) something is to remove or suppress what is offensive or objectionable.

Censorship is a noun form of the word that refers to the practice of censoring.

In general, censorship carries a negative connotation in the U.S.. Because we value the constitutionally protected concept of free speech, most of Americans object to anything that smells of censorship, especially by the government. Yet, most Americans favor at least some forms of censorship, which is why federal law prohibits the publication of pornography, profanity, and other morally questionable content through easily accessible public media like television and radio.

Censure (noun) means “an expression of strong disapproval or harsh criticism.” Similarly, the verb censure means to rebuke or condemn.

Churches and religious bodies might censure an individual as well, an action that might lead to excommunication.

Typically, censure is a formal, public action. An individual criticizing another would not, for example, be considered censure. Nor would a private rebuke. Censuring may or may not carry consequences. Ecclesiastical censure may result in excommunication (though not necessarily), whereas political censure is often used in place of any kind of punitive measures.

Writers and speakers occasionally confuse the two words primarily because of their aural similarity. Both words come from the same Latin word censēre, meaning “to give as one’s opinion, assess.” Both censoring and censuring involve the rendering of a negative opinion — the former leading to removal or suppression and the latter to formal and/or public denouncement.

But one typically only censors publishable material — words and images, while censure is reserved for people. I suppose it’s possible to censure a statement, leading to its being censored, but that would be an atypical use of censure.

As always, I’d love your feedback and comments. Please leave them below.