Search
Home / Blog / On the Superiority of Nerds

On the Superiority of Nerds

I have always tended to prefer the company of nerds to the company of the cool. It occurred to me many years ago that nerds have more fun. They are released from the pressure to enjoy only what is currently acceptable to enjoy by whatever cool culture in which they find themselves. Nerds are free to like what they like. In fact, it’s this liking of stuff considered nerdy by the non-nerdy that defines a nerd. These days nerds tend to like Dr. Who and Harry Potter and Japanese cartoons.

But wait, you say, I like Harry Potter and I’m not a nerd.

This may be true. Nerdiness also has to do with the degree to which you like stuff. Nerds don’t just like Harry Potter. They are bazonkers about Harry Potter. They own Harry Potter stuff. They name their pets Snape, or Doby, or Hagrid. They fantasize about attending Hogwarts. They memorize Latin spells. And so on.

And that’s precisely why I like nerds. They enjoy life more than cool people.

John Green is a writer and a proud nerd. He and his nerdy brother Hank call themselves the Vlog Brothers and communicate with one another by YouTube video, allowing the rest of us to listen in. They are smart and funny and enviably nerdy. In one of John’s more famous videos — see below — he says the following:

… nerds like us are allowed to be unironically enthusiastic about stuff. We don’t have to be like, ‘Oh yeah that purse is okay’ or like, ‘Yeah, I like that band’s early stuff.’ Nerds are allowed to love stuff, like jump-up-and-down-in-the-chair-can’t-control-yourself-love it. Hank, when people call people nerds, mostly what they are saying is, ‘You like stuff’, which is just not a good insult at all, like ‘You are too enthusiastic about the miracle of human consciousness’.

This part happens about :50 into the video below. It’s better to watch and listen than to just read it.

I agree, with John. Do you? I’d love to hear your perspective. Share your thoughts in the comments section below! 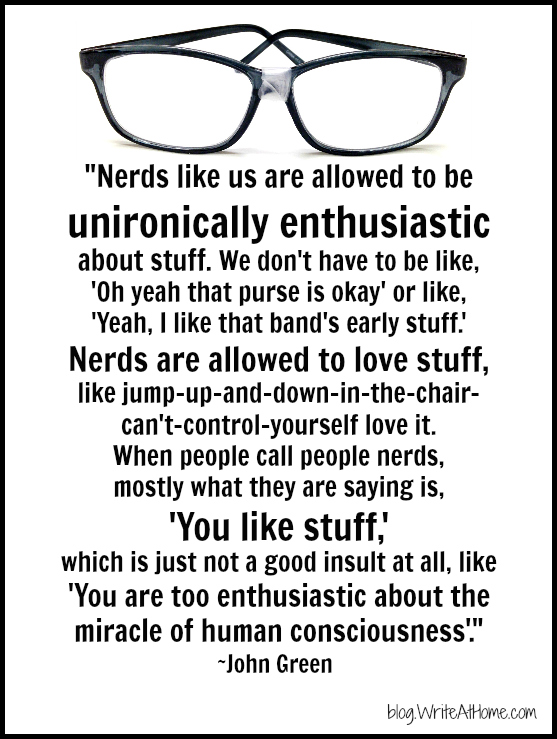