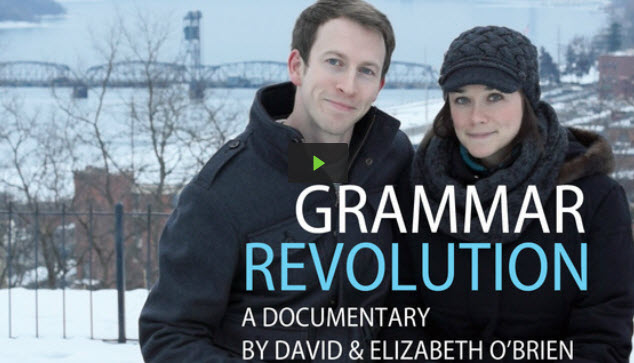 Lots of grammar-crazy people come across as cranky and ornery. I think that’s why Grammar Revolution caught my attention. The folks who run it — Elizabeth O’Brien and her husband David — come across as so stinkin’ nice. And I’ve never met anyone with half of Elizabeth’s enthusiasm for sentence diagramming. Come to think of it, I’ve never met anyone with any enthusiasm for sentence diagramming.

Anyway, I stumbled across their site a few weeks ago and shared some stuff on Pinterest and Facebook. Then I found out about their documentary project.

The O’Briens have begun a documentary on the subject of grammar. In particular, how it’s taught (or not taught) in American schools. What they have so far looks intriguing, and it might just contribute something useful to the ongoing conversation about education in this country.

WriteAtHome made a small contribution to the documentary project, and you can too. They are using a popular website called Kickstarter to raise the funds to finish the film. You can help out for as little as $5.

For the record, I don’t know the O’Briens other than through web videos like the one below, but if you watch it, I think you’ll see why I’m pulling for them. Check it out, and if you like, send them a few bucks. 🙂