6 Little Things to Improve Your Writing 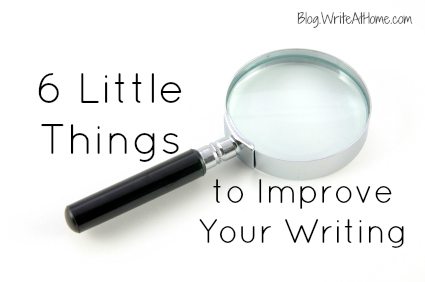 Every writer is different, but student writers of the same generation tend to fall into the same traps. The following are miscellaneous errors that our writing coaches encounter regularly. See if any of them look familiar.

Avoid using so as an adverb meaning very, as in:

I liked the movie so much.

So is meant to show a comparison of two ideas. It is usually paired with that, as in:

I liked the movie so much that I saw it seventeen times.

In informal, conversational English so has become the equivalent of very. We don’t recommend you use it this way in your writing.

The Generic Second Person: You

Avoid what we call the “generic second person,” which is using the word you to refer to people in general, rather than the particular person you are addressing, as in:

When you walk through the doors, you enter a large, paneled library.

A simple but awkward way to fix this is to replace you with one. This tends to solve one problem by causing another. Few English speakers comfortably use the generic pronoun one these days. It comes across as overly stiff and formal:

When one visits Paris, one should visit the Louvre.

Often, the best way to correct sentences with the generic second person is to start over and reword the whole sentence. Below are alternatives that avoid this sloppy use of you. In most cases there are many good options.

Beyond the doors lies a large, paneled library.

After walking through the doors, I entered a large, paneled library.

Visitors to Paris should consider a visit to the Louvre.

I always visit the Louvre when I go to Paris.

There are many fine professional writers who regularly break this rule. The generic second person is growing more acceptable today even in some formal writing. We still recommend, however, that you learn to write without depending on it for now. Once you’ve grown comfortable using other options, you too can decide to break this rule.

Note: Maybe you noticed that we use the word you in this lesson. We’re not breaking the rule, however. We are directly addressing you, the reader. It’s okay in that case, because it’s a specific, not generic, use of the second person pronoun.

Good writers also avoid using the “generic they” to refer to some mysteriously wise authoritative body responsible for just about everything in the universe. For example:

They should invent a more efficient automobile.

They say no two snowflakes are exactly alike.

Never use they unless you can identify exactly who they are.

Using This as an Article

This is a perfectly good pronoun. It can also be an adjective. Just don’t use it as an article (a type of noun-introducing adjective). Many student writers substitute this for a or an, as in:

I know this guy who lives in Cleveland.

What the writer really means is:

I know a guy who lives in Cleveland.

This can be used to indicate a specific noun already known to the reader, for example:

A fire chief lives on my block. This hero risks his life daily.

Don’t use this when you mean a or an.

Use exclamation points sparingly. Choose words and craft sentences that communicate strong feeling so that you don’t have to depend on a punctuation mark to do the job for you. And never, ever use more than one exclamation point to add emphasis!!!!!

For some reason student writers just love to have things happen “all of a sudden.” Hardly a narrative paper goes by without this adverbial expression. For originality’s sake, make a vow to avoid it entirely. That goes for suddenly too.

None of these issues are major. They are little things, but sometimes it’s the little things that make the difference between a good paper and a great one.