Search
Home / Blog / What Is Plot? 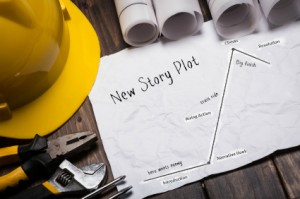 Have you ever heard someone complain about a movie by saying “It had no plot”? Usually, the person means either that nothing interesting happened in the movie, or that the events were difficult to follow. But he doesn’t really mean that the film had no plot. That wouldn’t be possible if we understand that a plot is the sequence of events in a story. If there are events, there is a plot. It might be a silly plot, or a boring plot, or a confusing plot, but if anything at all happens in the movie, it has a plot.

In fact, an even easier definition of plot might be: what happens in a story. In a sense, the plot is the story.

Whether you are writing a short story, a novel, or a screen play, the most important element is the plot.  A wise story-teller gives careful attention to the structure of the story by ordering the most significant events.

This is often not difficult to do, since most stories follow the same basic structure. We’ll use the plot diagram below to illustrate how most plots are laid out.

Let’s look at the basic parts of a story plot:

1.  Introduction:  Most stories begin with some kind of introduction. This is often where the setting is described and we are introduced to the main characters. A story’s introduction is usually brief.

2.  Narrative Hook: The narrative hook is the point of the story where the real action begins. It is when the major conflict is introduced – where we get an idea of what the story is really all about. If done well, this part of the story “hooks” the reader, catching his interest and pulling him into the story.

3.  Rising Action: Once the main conflict, or problem, of a story is introduced, events unfold leading up to the climax. In a good story, these events draw the reader further and further into the story with increasing interest. Rising action normally makes up the largest part of a story’s plot.

4.  Climax: The climax of a story is when the conflict finally gets resolved — the bad guy is defeated, the hero gets his girl, the journey comes to an end. Often the climax is the point of highest interest in a story. It is when we realize how it’s all going to end.

5.  Resolution: Some stories cease abruptly at the climax, but most stories contain a brief conclusion known as the resolution. During the resolution, any remaining loose ends get tied up and the story is brought to a tidy finish. Mystery stories, for example, often use the resolution to explain how the detective was able to find the murderer or solve the mystery.

Below is a simple children’s story with the basic plot points marked.

We’d love to hear from you. Leave your comments below.