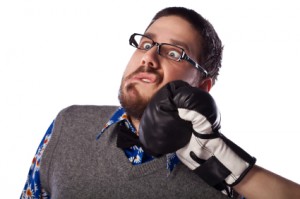 I’m sure what happened is what always happens with grammar myths: a good general principle grows over time into an iron-clad rule. Here’s the reasonable principle: active voice is usually preferable to passive voice.

Certainly, an over-dependence on passive constructions is a common problem, particularly in academic, business, and government writing. It’s a bad habit among those trying to sound formal or academic. It’s also a way of communicating about sensitive things without taking or placing blame. That’s why passive voice is so popular among politicians!

But there is are several situations where passive voice is the better option. It wouldn’t exist if there was a reasonable use for it, right? I’ll give you some examples below, but first, let’s review active and passive voice.

Let’s clear up a misconception. Passive voice isn’t simply using “to be” verbs. The verb “to be” in all its forms — am, is, are, was, were, be, being, been — is a useful and unavoidable part of the language. It’s a bland verb, to be sure, and good writers always look for ways to replace it with stronger action verbs, but it’s not the same as passive voice. The sentence I am often brilliant includes a be-verb and is in the active voice.

Neither is passive voice simply the use of helping verbs to create verb phrases. Passive voice requires verb phrases, but not all verb phrases are passive. The sentence My teeth are chattering from the cold includes a verb phrase, but is in the active voice.

What Passive Voice Is

Daffy Duck is the subject of both sentences. In the first example, Daffy Duck ran. The subject in this sentence acts. He does the running. This is the active voice.

In the second example, Daffy Duck doesn’t act at all. He is acted upon. He was elected. This is passive voice.

If you think you understand the difference, try the quiz below!

When It’s Okay to Use the Passive Voice

It’s okay to use the passive voice whenever you think it’s important that the subject be passive. An example would be when you want to encourage sympathy for your subject:

The first version is more common because it focuses on poor Grandma’s victimization at the hands of a careless caribou. The second, active version seems an odd way of putting it.

Both versions of this sentence are grammatically correct. The first is passive and the second is active, but neither is necessarily better than the other. The first emphasizes Barack Obama and would be appropriate in a report, biography, or article about the President. The second works better in a situation where the emphasis in on the electorate rather than the candidate.

When You Should Avoid Passive Voice

Active verbs tend to do a better job of moving sentences along and creating a sense of action and purpose. They are more lively and dynamic. That’s why you should stick to active voice unless a situation clearly calls for a passive verb.

It’s probably clear to you that the second option — the active one — reads better. It’s tighter and the verbs are stronger. If you were Tim, however, you’d probably prefer the first version, since it leaves you out of the picture.

And that’s the point. Unless it will get you in trouble, good writing typically shows actors acting. Make your subjects do stuff and your writing will improve. But don’t turn this principle into a law. There is a time and place for passive voice.

*This sentence has two passive constructions.

Can you distinguish active voice from passive voice? Take this quick, free quiz! 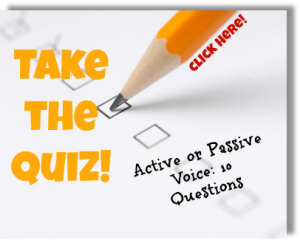 Comments are loved by us. Or should I say, we love comments. Either way, leave yours below!

When a Preposition Is an Adverb
Some Language Questions to Ponder