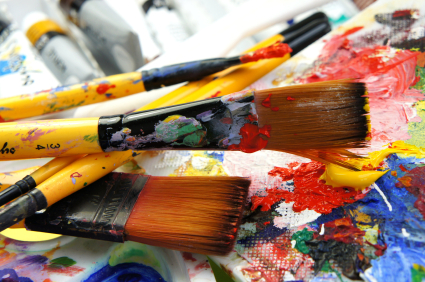 “A wisely chosen illustration is almost essential to fasten the truth upon the ordinary mind, and no teacher [or writer] can afford to neglect this part of his preparation.” ~Howard Crosby

Pictures stick to the brain better than ideas. Abstract concepts can be difficult to grasp unless they are associated with tangible images. What, for example, do you think of when you hear word gravity? Perhaps an apple falling onto the head of Isaac Newton? Maybe an orbiting satellite or an astronaut bounding across the moon? Whatever comes to mind, it is most likely some kind of mental image. Try it with all of the following abstract words. What pictures come to mind?

Thoughts are often concrete — visible, substantive, and solid. Some ideas only make sense to us after we have been able to creatively envision them.

WriteAtHome: We Teach Writing for You!
I remember watching a science program on TV that was trying to explain gravity — the force that causes the moon to remain in orbit around the earth. Scientists, the program explained, think the earth creates an indention in the fabric of space which causes gravity. I had no idea what they meant by this until they used a computer-generated image to illustrate the idea. It showed a flat crisscrossed grid that formed a plane. Then a large ball — representing the Earth — was placed upon the grid, which gave way beneath it like  flexible fabric under the weight of a bowling ball. Then a marble was rolled toward it — representing the moon. When the marble reached the earth-ball, it fell into the indentation around it and began orbiting in a spiral descent. It circled the ball like a basketball spins around the rim before dropping through. The narrator explained that space, unlike the plane, has three dimensions, but the concept is similar — the space displaced by a planet causes objects in motion to fall into the warping, causing what we call orbiting. I don’t know if that illustration is correct, but I understood it.

Believe it or not, I don’t have a scientific mind, but this idea made sense to me because of the illustration with the grid and the balls. Directors of science programs have apparently grasped the idea that making difficult concepts understandable requires creative illustration. The rule applies to communication of all kinds — including written communication.

The essay section of the new SAT will likely ask you to “support your position with reasoning and examples taken from your reading, studies, experience, or observations.” In other words, an essential part of the SAT essay, and generally any good essay, is illustration.

Does your essay defend the idea that the U.S. government has become too intrusive into the lives of ordinary citizens? You should have examples of invasions of privacy by government agencies. Share a personal anecdote, a recent news story, or a historical event that illustrates your position. Assuming your examples are factual and clearly stated, they will affect your reader far more dramatically than merely theoretical arguments.

Remember, we are not suggesting that you avoid abstract ideas; we are just encouraging you to make connections through word pictures and narrative illustrations. Your writing will be clearer, more memorable, and more persuasive.

Finally, it seems appropriate to end this lesson on illustrating with…an illustration. Here’s a passage by 19th century preacher Charles Spurgeon, a master illustrator. Notice how he paints a picture of the abstract idea of God’s sovereignty with a series of vivid, concrete images:

There is no attribute of God more comforting to His children than the doctrine of divine sovereignty. I believe that every particle of dust that dances in the sunbeam does not move an atom more, or less, than God wishes. That every particle of spray that dashes against the steamboat has its orbit as well as the sun in the heavens; and that the chaff from the hand of the winnower is as steered as the stars in their courses. The creeping of an aphid is as much fixed as the march of the devastating pestilence. The fall of the leaves from a poplar is as fully ordained as the tumbling of an avalanche.

Take the 100 Words Quiz!
Writing Prompt: Parent or Student of the Year