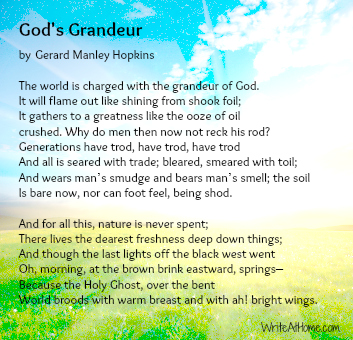 One of my favorite poems is a sonnet by Gerard Manley Hopkins called “God’s Grandeur.”

I love what Hopkins is saying in the poem, but what I find so fascinating is not so much what he says as how he says it. He quite obviously loved to toy with both the meaning and sound of words.

I’m going to talk about some of the things he does in this poem, but I’m a little hesitant to do so. Teachers of literature have a bad reputation for over-analyzing poetry, and I understand there is risk to this kind of scrutinizing. It can take the joy out of it — like having to explain a joke. I mean, if you don’t get it, you don’t get it.

On the other hand, literary analysis can be a labor of love. It is for me. When a work grabs me I want to know why. Don’t misunderstand. I enjoy it first, but there’s something in me that wants to figure it out and when I do, I often discover other wonders that make me like it even more. That’s my hope here. If you find that close analysis of poetry ruins the experience for you, I give you permission to skip my commentary and just enjoy the poem. Here it is:

The Grandeur of God

The world is charged with the grandeur of God.

It will flame out like shining from shook foil;

It gathers to a greatness like the ooze of oil

crushed. Why do men then now not reck his rod?

Is bare now, nor can foot feel, being shod.

And for all this, nature is never spent;

There lives the dearest freshness deep down things;

And though the last lights off the black west went

Because the Holy Ghost, over the bent

World broods with warm breast and with ah! bright wings.

This is a sonnet. As I learned from Richard Foster in his book How to Read Literature Like a Professor, you can usually spot a sonnet by its square shape. A sonnet is a rather rigid form and, as a result, a difficult form. Fourteen lines of iambic pentameter (accent on every other syllable, five stressed syllables per line). In this case, a Petrarchan or Italian sonnet, composed of two parts: an octave (8 lines) followed by a sestet (6 lines). The rhyme scheme for the octave is the traditional a-b-b-a-a-b-b-a. The sestet rhymes in the pattern c-d-c-d-c-d.

If you doubt that writing a sonnet is difficult, try it yourself. Even excellent writers find it challenging to communicate something meaningful, much less something profound and beautiful, within these strict parameters.

Hopkins holds only loosely to iambic pentameter here. He throws off the rhythm in various places and adds an extra syllable to a line here and there. It’s not possible to read this in a sing-song style. It’s more conversational than musical.

Another thing that throws off the rhythm (and makes it hard to spot the rhyme) is the technique of enjambment, which is where the poet continues a clause or sentence from one line to the next. We are more used to end-stopping, where a thought is completed by the end of each line. Hopkins often ends his thoughts mid-line. This is why it would be difficult to discern where lines begin and end if we only hear the poem read aloud.

The end rhyme (rhyming of the last words in the lines) is strictly according to sonnet form (God, oil, foil, rod, trod, toil, soil, shod, spent, things, went, springs, bent, wings), but because of the enjambment, we almost don’t notice them. We do, however, notice the various internal rhymes Hopkins sprinkles throughout: men/then, seared/bleared/smeared, wears/bears.

Hopkin’s play with the sound of words is most striking in his penchant for alliteration — the repetition of beginning consonant sounds. They are abundant in these mere 14 lines: grandeur of God; shining from shook; gathers to a greatness; reck his rod; seared with trade…smeared with toil; smeared…smudge…smell; foot feel; dearest…deep down; last lights; west went; brown brink;

Notice the masterful alternating of b’s and w’s in the last line:

…over the bent/world broods with warm breast and ah! bright wings.

Perhaps my favorite part of the poem is the rhetorical question in line 4: “Why do men then now not reck his rod?’

Nine one-syllable words that roll off the tongue. Say it out loud. Seriously; you know you want to. Say it again. And again. See what I mean? I love the repeating n’s in “men then now not.” I love the rhyme of men/then, the implied paradox of then now and the final alliteration of reck/rod. I’ll never write a line that good in my entire life!

By the way, reck means “to give heed to” and God’s rod is a symbol for his authority or rule. Hopkins is wondering why, given the glory of God so powerfully displayed in nature, men do not more readily bend their knee to Him. Hopkins, by the way, was a priest as well as a poet.

Oh, there’s plenty more: interjections like Oh! and ah!, the imagery of shook foil, oozing oil, and brooding with bright wings. But I’ll stop there — leave you with something to think about yourself.

So, how was that? Too much jargon? Too fine a dissection? Or did it help you see this wonderful poem from new perspectives? After reading this, do you like the poem more or less?