Differences in British and American English 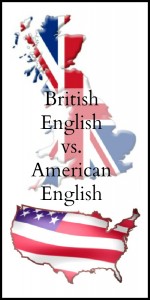 You probably know that Americans stand in lines while the British stand in queues. American cars have hoods and trunks while British cars have bonnets and boots. Americans ride in elevators, the British in lifts. American french fries are called chips in the U.K. and what Yanks call chips the Brits call crisps.

But when I stumbled upon the page below at OxfordDictionaries.com, I learned the list is a lot longer than I imagined. Whether you’ll be traveling to the United Kingdom in the near future, or if you are just curious, take a minute to click here and peruse. I’ve listed a few of my favorites below.

WriteAtHome: We Teach Writing for You!
*****
Feel free to leave your comments below!

One Space or Two After a Period?
Hanged or Hung?

Why We Should All Just Chill Out About Language Change