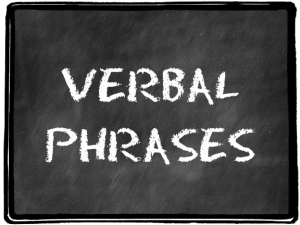 A participial phrase is a participle plus its modifiers or objects.

participle + direct object: Swallowing my words, I listened politely to the boss’s reprimand.

Notice that the participial phrases above all modify a noun or a pronoun. That means they are adjectival phrases – phrases that do the job of an adjective. For example, “limping painfully” modifies Ivan, “scratched and dented in several places” modifies hood, and “swallowing my words” modifies the pronoun I.

Participial phrases, therefore, are also a kind of adjectival phrase.

gerund + adjective: The baby’s loud crying kept me up all night.

gerund + prep. phrase: Tom’s talent is standing on one foot.

Because gerund phrases always act like nouns, they are also considered a kind of noun phrase.

An infinitive phrase is an infinitive plus its modifiers or objects all acting together as a single part of speech.

infinitive + adverb: To live simply is my goal.

infinitive + prep. phrase: This is the shortest route to take to Richmond.

Infinitive phrases, like simple infinitives, can be used like nouns, adjectives, or adverbs. Notice in the examples above, to live simply works like a noun and is the subject of the sentence. To take to Richmond functions like an adjective, modifying route. And to lose weight works like an adverb, modifying the verb began. That means an infinitive phrase can either be a noun phrase, an adjectival phrase, or an adverbial phrase, depending on its function in the sentence.

Fortunately, verbals and verbal phrases are easier to use than to explain. Most of us use them all the time in our speech and writing. Using them correctly is more important than being able to identify them (There are five verbals in this paragraph. Can you spot them?).

Grammar Rock: Prepositions
Where Does the U.S. Rank in the List of Most Educated Countries?