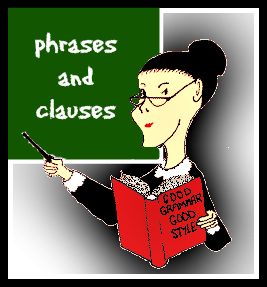 Most people find grammar confusing. I often wonder why that is. I suspect it’s because of how it’s taught. But basic grammar doesn’t have to blow your mind. There are just a handful of basic concepts you have to understand, and after that, it’s all about solving the puzzle.

Oh, sure, there are different kinds of phrases and different kinds of clauses, but before you worry about that, just grasp the simplicity of it all. When words join up together, they either form a phrase or a clause. There are no other possibilities.

So, what’s the difference between a phrase and a clause? Easy. Check it out:

A phrase is a group of words that functions like one of the parts of speech. Remember how each word does one of eight jobs? Phrases do some of the same jobs, only they do it as a group of words instead of a single word.

Let’s look at a simple sentence: A silly man danced. As with every sentence, each of these words functions individually as one of the parts of speech. The word silly, for example, is an adjective because it modifies, or describes, the noun man.

But what if you wrote it like this: A man in a red hat danced. We’ve replaced the word silly with a group of words: in the red hat. Each of these word is its own part of speech too (preposition, adjective, adjective, noun), but they also work together to perform the same function as the word silly. What kind of man is in the first sentence? A silly man. What kind of man is in the second sentence? A man in a red hat. Both silly and in a red hat describe, or modify, the word man. That’s why we call in a red hat an adjective phrase¹–because the group of words does the job of an adjective.

There are noun phrases and verb phrases, adjective and adverb phrases, prepositional phrases and even interjection phrases. There are others too: participial phrases, gerund phrases, and appositive phrases to name a few, but we can work on those another time. The simple fact is every one of these phrases works like a part of speech. Before you worry about the different kinds, just get the idea of a phrase in your head.

So how is a clause different from a phrase? Simple. A clause always contains a subject and a verb, or predicate. By subject, we mean a noun or pronoun that the clause is about. A verb is a word that shows action (or sometimes state of being, but we’ll get to that later).

Take the sentence from above: A silly man danced. This group of words includes a subject (man) and a verb (danced). The action of the sentence is danced and the word doing the dancing is man. That means you have a clause.

But a clause doesn’t have to be a complete sentence. Take the clause whenever I look at you. We have a subject (I) and a verb (look). So, we have a clause. But whenever I look at you is not a complete sentence. It’s just a fragment of an idea that needs other words to make it whole. It’s still a clause though. Clauses that cannot stand alone as a sentence are called dependent, or subordinate, clauses.

A sentence, by the way, is always composed of at least one clause. Sometimes you have to put two clauses together. You might say, for example: Whenever I look at you, my heart pounds in my chest. That’s a complete sentence made up of a dependent clause (whenever I look at you) and an independent clause (my heart pounds in my chest). Both word groups have a subject (I and heart) and a verb (look and pounds). That means they are both clauses.

But let’s get back to the basic idea here — the two simple points to remember:

Here’s an exercise to help you tell the difference. Which of the following are phrases and which are clauses?

The answers will be in the comments below. Let me know how you did!

If you like this article, think about subscribing to the blog. You’ll get one email per week with links to all our latest posts. Just click the Subscribe button above!