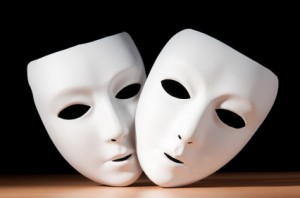 Tragedy and travesty sound alike, but they are nothing like synonyms. I’ve found that many people use the word travesty when they really mean tragedy, though no one ever gets it wrong the other way.

Both words carry a negative connotation. They are normally used when describing a bad, unjust, or disheartening situation.

Both words have literary origins. Tragedy comes from the Latin tragõidia and originally referred to a play with an unhappy ending. Travesty referred originally to an intentionally grotesque parody — a play that pokes deliberate fun at a particular work or type of play.

The words are used more broadly now, but their definitions are still closely related to their dramatic origins. A tragedy today can be any unfortunate or disastrous occurrence, and a travesty is an absurd misrepresentation or mockery of anything.

Visit WriteAtHome and Check Out Our Online Writing Classes!
So, the common expression a “travesty of justice” means not simply a terrible result of an attempt at justice, but a mockery or parody of justice. Thus, to say that the war in Afghanistan, for example, is a tragedy is different from saying it is a travesty, even though both statements may, in one’s opinion, be true. Saying it’s a tragedy means the outcome is unhappy, even horrific. Saying it’s a travesty means it is an ugly mockery of what war is or should be.

A trial where justice is talked about, but not carried out, is certainly a travesty. If it results in the death or imprisonment of an innocent man, it is a tragedy as well.

If your team loses in the Super Bowl, it may seem a tragedy, but if the game was played according to the rules, it is not a travesty.

A hurricane, earthquake, or tsunami is a tragedy, but not a travesty.

A mocking portrayal of a presidential speech on Saturday Night Live is a travesty, but not a tragedy.

Till, ‘Til, or Until?
Words We Confuse That Spellcheckers Miss, Part M