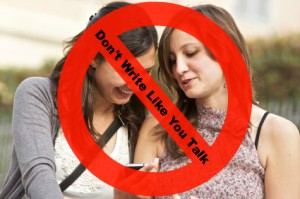 If you’re paying attention, you probably noticed that last week I posted an article titled “Write Like You Talk.” This one says the opposite, but read on, and you’ll see that both statements are equally good advice.

Good writing sounds natural to the writer’s ear. If you can’t imagine comfortably speaking the words you’ve written, you should concentrate on writing like you talk. This is particularly good advice for students who tend toward awkward or stilted writing.

Check Our Our Tutorial Writing Classes at WriteAtHome.com!

On the other hand, most of us have developed bad speaking habits that we want to avoid when we write. Most of us speak more informally than would be appropriate or desirable in print. Informal speech often involves grammar and usage errors, stutters, fragments, ums, wells, y’knows, and slang expressions that might be confusing to the reader. Even if we are aiming for a casual tone in our writing, we want to avoid these distracting habits.

Think about it this way. Your writing should sound like you would want to sound if you had as much time as you need to prepare your words.

For example, if you were telling a friend about a weekend trip to the beach, you might sound like this:

“Dude, guess what I did last weekend? Me and Steve went to the beach, y’know? Yeah,  for real. It was awesome. It was like a hundred degrees, but the water was so totally sweet. The waves were decent, too; we boogie-boarded for, like, hours. Don’t touch my back, dude, because I got burned to a crisp. Seriously. Yeah, it’s killing me, but it was totally worth it. I mean, it was like, woah.”

This might fine for casual conversation, but you would want to sharpen things up if you were writing it. There are unlimited possibilities, but one less informal approach would be:

Over the weekend, I went to the beach with my friend Steve. The sun was strong, but the cool ocean provided plenty of relief. I spent several hours riding the chest-high waves on my boogie board. I stayed in the sun too long and burned my back, but that wasn’t enough to ruin a great day.

Depending on your tendencies, personality, and the type and purpose of your paper, you may need to focus more on writing like you talk than on not writing like you talk, but every writer should keep both rules in mind. In most compositions, aim for a tone that is comfortable, but not too casual.

Where the Word Soccer Comes From
There, Their, and They’re