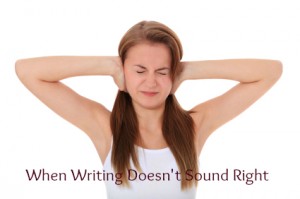 There are a number of comments that all English teachers have heard at least a gazillion times. Among these are:

“Are we going to be graded on this?”

“Why are those circus acrobats playing Bingo in the courtyard?”

Okay, maybe that last one isn’t quite as common. But more than any of these, the sentence that strains the sanity of every grammar-conscious educator is:

“But it doesn’t sound right!”

Have you ever struggled to use correct grammar without sounding awkward or unnatural? My friend Mary once started a heated debate while at a church get-together.  The group was waiting for a late-arriving couple. When Mary heard the doorbell ring, she announced, “It is they!”

She was grammatically correct in her choice of pronoun, but the sentence sounded so odd to everyone that they laughed and swore it must be wrong. She actually called me from the party to settle the dispute. I told her she was right but that she could have avoided the argument by saying something more natural like, “They’re here!”

Despite the hundreds of corrections from my parents as I grew up, I still have a hard time getting out sentences like, “My friends and I are going unicorn hunting.” Me and my friends still sounds more comfortable in casual settings.

Check Our Our Tutorial Writing Classes at WriteAtHome.com!
Did you ever wonder why good grammar sometimes just don’t sound right? It’s really no mystery. What sounds right is what we are used to hearing. And sometimes grammar that violates conventions is more common than strictly correct grammar.

Actually, most good grammar and usage does sound right to us. Our eyebrows would elevate if someone announced, “Me are going home.” That sentence is wrong, of course, and our ears notice right away. It’s not a common error, so it stands out.

I am not a grammar Nazi. I’m not the kind of guy who will interrupt you to point out your verbal faux pas. I might notice mistakes (I can’t help it), but as long as I understand your meaning, and I like you, I probably won’t correct your spoken English.

But writing is different. When we write, we have the time to think carefully about the rules of language. Writers have no excuse for sloppy grammar unless it’s done on purpose — like the narrator’s dialect in Mark Twain’s classic The Adventures of Huckleberry Finn. Dangle your participles, mix up your pronoun cases, and scramble your verb tenses all you want on the phone, but get those things straight before you send the email, mail the letter, or turn in the essay.

The point to remember is this: Don’t trust your ear. Learn the rules of English and pay attention to the trouble spots — those expressions that may sound fine in a casual conversation, but will irritate the grammar-conscious reader. What sounds right and what is right are often two different things.