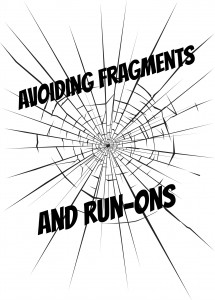 Today’s post comes from a lesson we provide in Middle School Composition 1. It is written for young writers.

Growing writers should make it a habit to always write in complete sentences, even if more experienced writers sometimes choose not to. The two mistakes are to create fragments or run-ons instead of complete sentences. This lesson will explain fragments and run-ons and how to correct them.

First, let’s review the five essential characteristics of a sentence:

Anytime you leave out one of the last three characteristics of a sentence — a subject, a predicate, or a complete thought — you are left with an incomplete sentence, or sentence fragment. This is a common problem among young writers.

Fixing the problem is as simple as adding the missing elements. Here are a few examples and their corrected versions.

Another common problem occurs when students improperly join more than one sentence with only a comma or no punctuation at all. We call these run-on sentences. Below are three kinds of run-ons to avoid.

1.      The comma splice: Joining two or more sentences with only a comma creates a run-on called a comma splice.

Example: The ticket booth opened at noon, by two o’clock the concert was sold out.

Commas are not strong enough to hold two sentences together. You need a period or a semicolon for that.

Example: The private investigator discovered footprints under the windows, and dusted for fingerprints on the doorknobs, and found a suspicious handkerchief on the tile floor while calling headquarters on the kitchen phone.

Example: The yard sale was more profitable than expected it brought in more than two hundred dollars.

There are several ways to correct run-ons:

The yard sale was more profitable than expected. It brought in more than two hundred dollars.

The ticket booth opened at noon, but by two o’clock the concert was sold out.

The ticket booth opened at noon; however, by two o’clock the concert was sold out.

The yard sale was more profitable than expected because it brought in more than two hundred dollars.

3.      Combine using a semicolon:  A semicolon is strong enough to connect sentences, but does not indicate a completed sentence. Only use this option if the two ideas are very closely related to each other.

The yard sale was more profitable than expected; it brought in more than two hundred dollars.

This probably seems like a lot of grammar to remember. Don’t worry; just do your best. In time, writing in complete sentences will become natural.