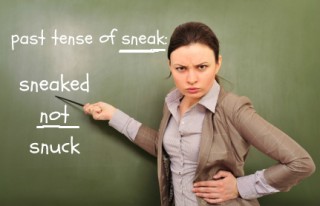 I have confessed it before: I am a reformed grammar snob. I was once an intolerable nitpicker. But even at my worst, I think I was able to keep some perspective. I would chuckle at unnecessary apostrophes and shake my head at dangling participles, but I don’t think I ever used words like, “It drives me crazy when people say irregardless!”

I’ve taught English writing and literature for more than twenty years. I tend to know more and care more about grammar and linguistic conventions than most, but I just don’t understand why folks get so worked up. Okay, people make mistakes. Some people never learned any better. Some people just don’t care as much as I do. So what? There are plenty of more important things to worry about.

Let me illustrate with the following comment taken from a writing blog I follow. Keep in mind that the post this commenter is replying to is even-handed, gracious and written by an experienced writer and editor. The post addresses the increasing acceptance of snuck by dictionaries that once acknowledged only sneaked. This is one response:

“Completely appalled”? “Egregious”? I think maybe that’s overdoing it. I find her inclusion of H in IMHO rather ironic in this situation. Where does she get her definition of “substandard English”? Who determines those standards? Look, I don’t take issue with her perspective as much as her tone. We all have our opinions and preferences. If she prefers sneaked to snuck, fine. But why cast aspersions on those who like snuck? Who cares?

I was unable to validate her claim that snuck originated with Huckleberry Finn. That’s possible, but so what? Sneak was the invention of Shakespeare (who else?).  It took on a regular past form — sneaked. But in the 1800s, some Americans, including Huck, started saying snuck. It was considered colloquial usage for more than a century, but how long does a word have to be in circulation before you acknowledge it? Most dictionaries are saying it’s time to bend to popular usage.

That’s how it works in the U.S. We don’t have an authoritative body like the Académie Française, which determines official rules of diction and grammar. Our “system” is more organic. Various dictionary makers convene periodically to discuss changes to the language. They tend to be cautious about accepting jargon and slang, but when a word endures popularly for enough time, they appropriately give it the nod.

We don’t have to like it, but we don’t have any ground to stand on when it comes to assertions like, “snuck is substandard English.”

I also have to take exception to the commenter’s suggestion that pronoun case errors (i.e., between you and I) and non-standard punctuation usage is “foisted” upon the trusting young by English teachers. Most teachers I know fastidiously teach grammar and punctuation according to accepted standards. The idea that English teachers are sabotaging the language is silly. I guess she had a bad English teacher once upon a time.

Oh, one more thing. The idea that commas and periods always go inside quotation marks because that’s “where they belong” is a little loony too. The British have different rules, and we only do it that way in America because of limitations on printing presses in the early days. We’ve just kept the rule for the sake of consistency.

Let’s all just take a deep breath and relax, okay?

Oh, and here’s the data on sneaked vs. snuck. A Google search of the two shows 4.9 million results for sneaked and 10.5 million for snuck. So, online, people use snuck more than twice as often. Isn’t it paradoxical to say that two-thirds of English speakers prefer the “substandard” usage? But that’s online. What about real published works? Publications still favor sneaked, but as you can see in the graph below, snuck is sneaking up on it, and has been for a few decades.

I’d really like to hear from you on this. Does bad grammar infuriate you? Or do you share my concern for the critics?

Where Did OK Come From?
Inalienable or Unalienable: Either Way, What Does It Mean?