Overview of Basic Figures of Speech for Writers 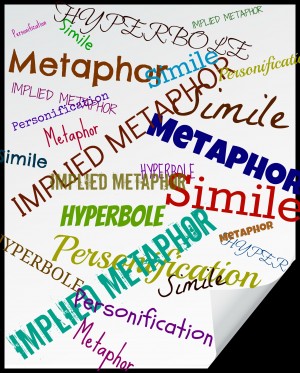 “You are driving me up a wall!”

My mom used to say that to me a lot when I was a kid. I remember being confused about what she meant. I would get a mental picture of the two of us in a tiny taxi-cab. I was the driver, she was in the back seat, and we were riding vertically up a wall like a spider. It was a weird picture, and I didn’t know what it had to do with my mom being irritated at me (I might have been trying out my new pocket knife on the coffee table or shaving the heads of my sister’s dolls).

Mom was using a figure of speech. Figures of speech are expressions not meant to be taken literally. Literally means precisely as the words indicate; to the letter. In other words, figures of speech mean something, but not exactly what they might seem to mean. Driving someone up a wall, of course, means causing them to be bothered or making them angry.

Kids sometimes have a hard time understanding figures of speech. Have you ever heard a conversation like this among kids?

Ted may understand what Ed means, which is not literal, but to be funny, he intentionally takes his words literally.

People use figures of speech all the time (in fact, I just used one — I didn’t mean literally “all the time.” I just mean often).

There are several common kinds of figures of speech you should learn so you can use them in your writing:

A simile is a comparison of two things using the words like or as. Similes help your reader make connections to things they are familiar with. Sometimes they reveal an aspect of what you are describing that wouldn’t be apparent otherwise. Similes help communicate subtle impressions and emotions that literal description sometimes can’t.

Metaphors are like similes, except they leave out the words like or as. They also compare things, but by saying one thing is another thing, rather than saying it is like another thing. Simple metaphors normally come in the form A is B.

When a metaphor isn’t stated directly (A is B), it’s called an implied metaphor. The comparison is clear, but more subtly stated.

Hyperbole (pronounced  hi-per-bull-lee, not hyper-bowl) is using exaggeration to make a point.

Be careful not to fall into the habit of repeating dry and dusty old figures of speech that have become cliché. All clichés were creative and original at one time but have lost their zing through overuse. Do the hard work of coming up with your own fresh figures of speech.

We love comments. Feel free to add your thoughts or questions below.

Some Random Language Questions
Leaped or Leapt? Creeped or Crept?