Leaped or Leapt? Creeped or Crept? 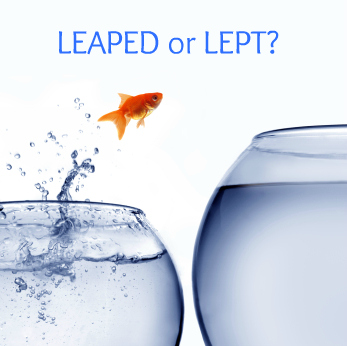 One interesting thing about the word leap is that it has two acceptable past tense forms. You can choose either that you prefer: leaped or leapt.

In the United States, leaped is a bit more common and folks in the U.K. tend toward leapt. I use either depending how I think the sentence sounds. See the charts below to compare American and British usage of this word.

Just avoid the common misspelling lept. It’s an easy mistake to make, since the past tense of sleep is slept, and weep is wept. Remember — English is goofy about stuff like this.

And since we’re on the topic, I should point out that the preferred past tense of creep remains crept, even though we are seeing creeped creep into common usage and even some dictionaries. This is probably the result of the expression creep out, with its past form, creeped out. You just don’t hear anyone say, “That dude really crept me out.” Other than this case, I recommend sticking with crept.

Below is a chart of American use of leaped vs. leapt in published works. Leaped seems to be losing ground.

This is the same comparison in British publications. Leapt took over as the preferred form in about 1919.

We’d love to hear your thoughts or questions. Please post them below.