Search
Home / Blog / Some Tips for Quotations and Dialogue 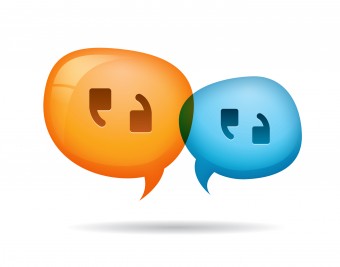 Mastering the mechanics of dialogue tends to be a problem for student writers, but this lesson will help you. It’s really not that hard to remember what to indent and where to put punctuation marks.

Quotation marks are used to identify the exact words spoken by a character. In American English, commas and periods are always placed inside the quotation marks:

Tom asked, “What time is the dance?”

Tom yelled, “My sandwich is missing!”

I told you never to say, “I don’t like oysters”!

Why do you think Elmer said, “My name isn’t Elmer”?

Sentences in quotation marks, just like all sentences, should begin with a capital letter.

Most quotes are qualified by conversational tags. These tags explain who is doing the talking. Examples include: he said, she replied, the witness stated, the boy stuttered, etc. If a conversational tag comes before the quotation, use a comma after it:

If the tag comes after the quotation, place a comma, question mark, or exclamation point inside the quotation marks:

“I beg your pardon, but this hat belongs to me,” he replied.

It is common for the conversational tag to interrupt the words of a quotation. In this case, use commas before and after the interrupting tag. The first goes inside the quotation marks, remember:

“I am quite certain,” Michael insisted, “that the hat is mine.”

When writing dialogue, begin a new paragraph every time your speaker changes. This rule is designed to help the reader keep track of who is speaking.

The teacher paused and spun around. “Eric, what do you think you are doing?”

Mr. Wilson was too quick for that one. “You appear to have a pencil behind your ear. Why would you be looking for it in Miss Randle’s desk?”

“Actually, Mr. Wilson,” the boy replied, “I wasn’t looking for a pencil.”

“No, I was planting a miniature tracking device in Laura’s notebook. I’m actually an undercover CIA agent.”

Mr. Wilson didn’t find this amusing, but the class burst into laughter.

Writing realistic dialogue is difficult. It requires a keen ear for the subtleties of human speech. Good dialogue writers must be good listeners. They must be able to pick up on the expressions and rhythms of ordinary conversation and reproduce them in written form.

There is no easy way to learn how to write interesting, believable dialogue. It just takes practice. As you write dialogue, read your words aloud to see if they have the feel of real human speech. Is this the way people really talk to one another?

We appreciate comments! Leave yours below.

Lie or Lay? Rise or Raise? Why You Should Know What a Transitive Verb Is
Close-minded or Closed-minded?