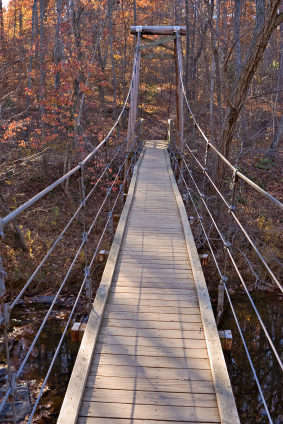 The Hero enters the Mythological Woods by crossing the Threshold. He journeys through strange yet deeply familiar forces, learning new rules and being tested, overcoming obstacles and conflicts.

There must be a sense of inevitability to the Call, something that rendered the World of the Common Day untenable to him and to push him over the Threshold – if the Hero could possibly step back and go on as before, he needs stronger motivation.

To heighten the drama, it’s a good idea to have great contrasts between the World of the Common Day and the Mythological Woods where the Hero engages the real action of the story. Iin the movie, Witness, for example, the city detective goes from the rough streets (Common Day) to living on an Amish farm (Mythological Woods).

Dorothy goes from black and white Kansas to Technicolor Oz. Jim Hawkins goes from a small inn on the coast to a ship on the sea. Mitch McDeere goes from a small Boston apartment to a fine Memphis house. Hogwarts is dramatically different from the Dursleys’ house where Harry Potter once resided. And the contrasts between the Detroit police station Eddie Murphy’s in at the beginning of Beverly Hills Cop and the one in southern California couldn’t be greater.

The Hero’s accepting the Call to Adventure and his crossing of the Threshold is his Initiation, because here’s where the Hero is initiated into a new life, dies and is reborn, and lives his new, far more challenging life.

And when the Hero has decided to embark on the journey, leaving the World of the Common Day behind, brushing past the Threshold Guardian, he is in a zone of magnified power, the world of the unknown, outside the village, outside his culture and traditions in metaphorical darkness – Here Be Dragons.

He is, in short, in the Mythological Woods. He has embarked on the Road of Trials, and in the Woods he’s aided by the amulet, advice, and secret agents of the supernatural helper, if he has them.

More on that next time.

Do you like this article? We post lots of great stuff every week. Be sure to keep up by subscribing to our blog. You’ll get one email each week with links to all the new posts. Click the Subscribe button in the upper-right-hand corner.