Words We Confuse That Spell Checkers Miss, Part B 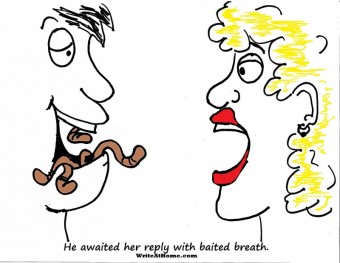 I defined homophone in a recent post and talked about the problem they pose for writers. Never for speakers, of course, because they sound the same. They just have different spellings, and it’s easy to confuse them when writing.

Keeping these words straight is tough. Sometimes there’s a trick. Other times, you just have to learn the difference. I will periodically talk about these troublesome, spell checker-defying homophones to help you get them down.

Which of these cause you trouble? 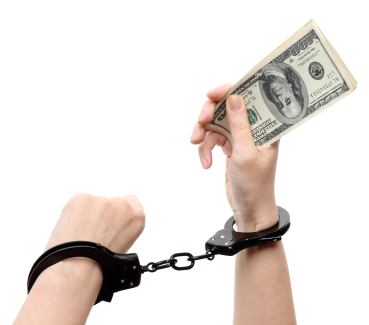 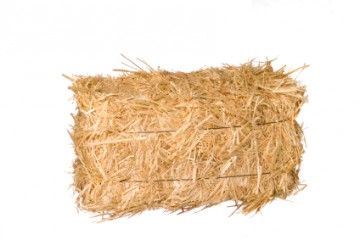 These can both be both action verbs and therefore easy to mix up. Bail, often used as part of the phrasal verb bail out, can mean to release from jail after having posted money as security. Bail is also a noun meaning the money posted to get somebody out of jail pending trial. To bail someone out also has a less literal use. It means to help someone out of a jam. It’s also used to mean jumping out of an airplane (hopefully with a parachute) Bail has another use too: It can mean scooping water out of a boat.

To bale, on the other hand, is what you do to hay or paper — form it into bundles (which are also called bales).

Students usually confuse these two in the expression, bated breath, by writing baited breath. The verb form, bate, means to restrain or lessen; it’s related to abate. So when we say bated, we turn the verb into a participle and use it as an adjective that means lessened or restrained. To wait with bated breath means you are so anxious you can’t breathe.

If something is baited, however, it means it’s loaded with bait — something to lure something or someone onto a hook or into a trap. I wonder what people imagine when they read baited breath?

Someone in tears is not balling, unless he is crying while simultaneously playing basketball. To cry or wail is to bawl.

Most people are familiar with bomb — the device that explodes. They just don’t know there’s another word pronounced the same way that refers to an ointment that heals wounds or ameliorates pain. Oh, and if you are still saying da bomb, you should know that slang term has been out of style for many years.

The funny looking one, bologna, is the lunchmeat my mother inflicted on me in my elementary school lunch boxes. With mayo. On white bread. Do you realize how hard it is to trade a bologna and mayo on white sandwich? Fortunately, Arnie Hogan loved bologna-on-white, so I could usually pawn them off on him. But I digress…

Baloney, the phonetically-spelled version, is the word we use when we mean bunk, hogwash, hooey, and nonsense (so many fun words that mean baloney). So, you probably mean someone is full of baloney, not full of bologna. Unless you are talking about Arnie Hogan.

Bare means naked or getting naked: If you bare your arms, your arms will be bare. If you don’t mean naked, you mean bear. Bear is the picnic-basket eating, forest-fire preventing animal. It’s also the verb meaning to carry.

He will bear the load on his bare back.

Base is the word for a support at the bottom of a structure, or the starting point or foundation of an idea. It’s also the thing you step on in baseball or tag in various children’s games. A military base is a place where they locate their operations. Base can also be an adjective meaning without morals.  Bass is the sound word. It’s the low pitch in singing or the deep, rhythmic instrument.

What makes this even more confusing is that bass, in addition to being a homophone with base, is also a homograph with the word bass — as in the fish and rhyming with grass. Homographs are words that are spelled the same, but have different meanings. If they also have different pronunciations, like bass, they are also heteronyms. Confused? Don’t worry about it!

The one with all the A’s is an outdoor market. The one with the Z is an adjective meaning strange or unusual. A market selling nothing but polka-dotted unicorns and dancing porcupines, therefore, would be a bizarre bazaar.

I haven’t seen kids mess this up in a long time, but it happens. If you mean the buzzing insect, you need two E’s. All other uses require be.

Berry is the little fruit. The verb is bury.

It’s hard to believe I see this one confused, but I do. Blew is the past tense of the verb to blow. Blue is the color.

When people, organizations, or countries get together for a particular purpose, it’s called a bloc. I often see writers who assume this word is spelled the same as the more common block.

A boar is a male pig; that’s the only definition. Bore can be a verb meaning to produce boredom in someone — like this blog post maybe? To bore can also mean to drill a hole in something. Bore can also be a noun that means a person who is dull and uninteresting.

I have to assume that any confusion of these words is just carelessness. Bodies is the plural of body. Body‘s is the singular possessive form. You’d use it in a phrase like “the body’s natural beauty.”

Bolder means more bold. The one with the U in it means a large rock.

Both of these words have numerous definitions. The most common use of brake is either as a noun or a verb that something to do with stopping or slowing down: You brake by hitting the brakes on the car. A lesser-known definition of brake is a place overgrown with bushes.

In the dictionary I’m looking at, break has 73 definitions! And that doesn’t include phrases like break away, break down, break in, break camp, break even, or break ground. It can mean to split into pieces, to rest, to dissolve, to interrupt, etc.

Bread is the common food item. Bred is the past tense of the verb breed.

Bridal is an adjective that means of, for, or pertaining to a bride or wedding. Bridle is a sort of harness for a horse.

The only time you use but with one T is when it’s a conjunction in a sentence. All other butts, including the cigarette kind and the rear-end kind, requires two Ts. The expression “no buts about it” confuses people because buts is used like a noun, not a conjunction. But it’s referring to the conjunction. If something is a sure thing, no one would object with a statement starting with but. So, there would be no buts about it.

Do you confuse any of these B homophones? If you’ve learned any tricks for remembering the difference, please share them in the comments below!

Writing Prompt: Describing A Face in the Crowd
What Is a Feghoot?