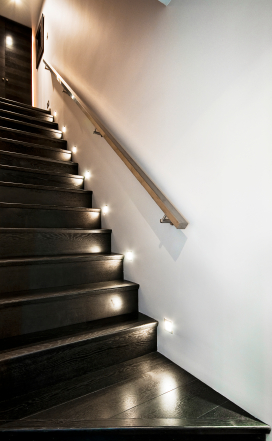 My high school graduating class voted me Wittiest. It’s hardly something I boast about. Best Looking? Most Likely to Succeed? Nope. I got Wittiest. Does any other school even have such an award? In my school, it went to the guy who made people laugh but wasn’t obnoxious enough to qualify as Class Clown (That distinction went to John Gerrold, who, at one reunion, emerged from the restroom onto the dance floor with twelve feet of toilet paper trailing from his pants. Get the idea?) I tended to be funny without getting in trouble for it.

But I don’t see myself as particularly witty (My teenagers wholeheartedly agree). I’m not quick enough on the draw. More often than not, I come up with the perfect retort only after the opportunity has passed. Do you know the feeling? The light bulb comes on and you think, “That‘s what I should have said!”

Apparently I’m not the only one who experiences this. I stumbled upon this graphic on someone’s Tumblr the other day: 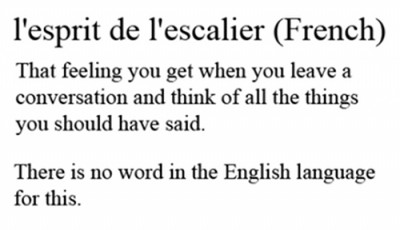 Esprit de l’escalier can be literally translated “staircase wit.” It’s a French idiom that has no parallel in English. But it should. It summons the vision of someone leaving the house at the end of the evening — descending the stairs — when the perfect witty remark belatedly dawns upon him.

But since there’s no English word for it, we can just borrow the French, oui?