The Heroic Journey 6: The Nemesis 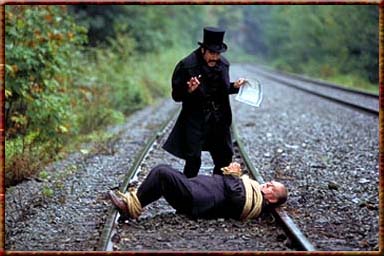 Today’s article is the sixth in a series of  guest posts from freelance writer, editor, and former WriteAtHome writing coach, David Sims. Read them all — they’re great!

Next to the Hero, the most important character in the heroic journey, the foundational form of all storytelling, is the evil one. The Nemesis. The bad guy. The villain. The character who keeps the Hero from getting what the Hero needs.

It’s one of the strongest rules of writing: Your story is only as good as your Nemesis is bad. A weak Nemesis means weak conflict, which means a weak story. If the toughest opponent your Hero faces is a shopkeeper who overcharges him, nobody’s going to care about it.

The evil one, or Nemesis, is the chief antagonist driving the novel’s action, the one most in the way of the Hero achieving his goal. He can be explicitly out on the pages or behind the scenes, acting through agents, henchmen and lieutenants – if he himself doesn’t appear, his minions must appear. His role is to hatch a plot and carry it out, providing the tests and trials of the Hero.

The Nemesis can be a villain or simply an opponent – Apollo Creed to Rocky. Not an evil man, but the man Rocky must beat in a fight. Or a good guy in opposition to the Hero. In the movie Amadeus, Salieri is the Hero and Mozart is the Nemesis – he most stands in the way of Salieri achieving his goal. In Shrek, Lord Farquaad is the Nemesis – Shrek’s falling for Fiona, he wants to win her love, but the person who most stands in his way is Lord Farquaad, who’s going to take her away and marry her.

From early on, the reader must anticipate – “with growing vividness,” Robert McKee says – the scene in which the Hero will be face to face with the most powerful focus of the forces arrayed against him.

The Nemesis serves another role — on the Hero’s Inner Journey, the Nemesis embodies the Hero’s inner conflict.

Shrek’s inner conflict is his fear of being an ogre and of risking rejection by showing the princess who he really is, and Lord Farquaad verbalizes that, saying to Shrek oh you want the princess? Isn’t that funny, you’re just an ogre, you think she’ll really like you? In the movie and novel The Firm, the Bandini, Lambert partners are Mitch McDeere’s Nemesis, they embody the values he thinks he wants – rich, prestigious, successful.

The selfless, self-sacrificing Hero conflicts with the selfish, self-centered Evil One. They push the action against each other, providing the story’s momentum. Generally it’s due to actions of the Evil One that the Hero embarks on the Journey, and the Hero’s acts force the Evil One to react, which tests the Hero.

Oh, and no “Innocent Evil Ones” – the emotional payoff for the reader is seeing how the Hero, acting selflessly, confronts and defeats a selfish Evil One. We love seeing Rocky knock out his opponent, we love seeing the bad guys lose, the murderer sentenced, the kidnapper caught. Readers love seeing noble efforts against evil, and triumph.

But the Evil One cannot be cardboard, he must be three-dimensional. There must be something humanly likeable about him. Graham Greene would humanize villains by having him painted as a thoroughly despicable character, and when the Hero’s sneaking up on him to kill him, he sees the villain reading a letter from his daughter and he’s crying because her puppy died, something like that. He had one villain always cleaning his fingernails. Just some detail to humanize them, some flaw to engender a bit of human sympathy.