Search
Home / Blog / Buckler of Swashes or Swasher of Buckles?

Buckler of Swashes or Swasher of Buckles? 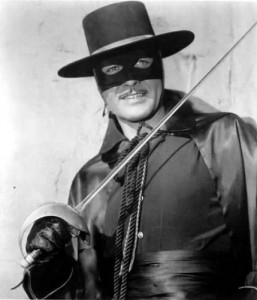 Zorro was a dude who could swash some serious buckles!

My friend Will made me chuckle to myself (CTM) with his response to my previous Three Musketeers post, in which I noted that the three musketeers seem to be four men with swords and no muskets. Will responded:

… maybe it points to that not age-old debate of whether a swashbuckler is a swasher of buckles or a buckler of swashes.

Swashbuckler is a great word, isn’t it? It’s fun to say and evocative despite its unfamiliar parts. But to settle Will’s imaginary debate, swash is an archaic word for making noise by striking, and a buckler is a small shield. According to the website titled Curious Word Origins, the portmanteau word swashbuckler first appeared around 1560 and was an insulting term for someone who is all talk — akin, I guess, to a sword-rattler. It was applied originally to modestly skilled swordsman who made a lot of noise. In time, the application broadened.

In the early heydays of Hollywood, the term took on a more romantic connotation when folks began applying it to heroic characters played by the likes of Erol Flynn and Douglass Fairbanks Jr. Think Robin Hood, The Three Musketeers, The Scarlet Pimpernel, and Zorro.

The Funny Thing about the Three Musketeers
SAT Essay, Part 5: Three Tips for Supporting Your Position