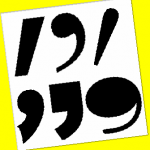 This news is a bit dated — meaning it is not new news — but it provides solid supporting evidence for those of us who argue that precision in the area of punctuation is important. It’s from an article in the N.Y. Times from October 25, 2006. Thanks to Nancy who posted about it first.

The Comma That Cost 1 Million Dollars (Canadian)
By Ian Austen

OTTAWA, Oct. 24 — If there is a moral to the story about a contract dispute between Canadian companies, this is it: Pay attention in grammar class.

The dispute between Rogers Communications of Toronto, Canada’s largest cable television provider, and a telephone company in Atlantic Canada, Bell Aliant, is over the phone company’s attempt to cancel a contract governing Rogers’ use of telephone poles. But the argument turns on a single comma in the 14-page contract. The answer is worth 1 million Canadian dollars ($888,000).

Citing the “rules of punctuation,” Canada’s telecommunications regulator recently ruled that the comma allowed Bell Aliant to end its five-year agreement with Rogers at any time with notice…

The regulator concluded that the second comma meant that the part of the sentence describing the one-year notice for cancellation applied to both the five-year term as well as its renewal. Therefore, the regulator found, the phone company could escape the contract after as little as one year…

To bolster its appeal, Rogers commissioned a 69-page affidavit, mostly about commas, from Kenneth A. Adams, a lawyer from Garden City, N.Y., who is the author of two books on contract language. It disputes the regulator’s analysis of what Mr. Adams calls “the rule of the last antecedent.”

That’s right. The contract termination was allowed because a single comma rendered a key sentence ambiguous. Yikes. Learn your comma rules, people! Also, learn when not to use commas.