Search
Home / Blog / The Handicap of Being a Naturally Good Writer

The Handicap of Being a Naturally Good Writer 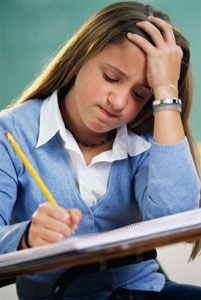 But Mr. Chang had some quirks. He had terrible eyesight despite his thick-lensed glasses and had to nearly press his nose to the chalkboard as he worked problems. He rarely turned around, actually. He would talk in a monotone to the board and barely wait after pausing with an obligatory, “Any questions?” Funny thing about that question. What teachers often don’t understand is that you have to have some basic grasp of the subject before you even know enough to ask a question — at least one more intelligent than, “Can you explain that again? I don’t get it.”

When that question came — which was often — Mr. Chang looked perplexed and repeated several of his most recent utterances in roughly the same words. Only quicker. Then he moved on. He never appeared angry. Just confused — as if he had no idea why we hadn’t been able to follow his explanation the first time.

Somehow I ended up passing calculus that year, but it was despite Mr. Chang, not because of him. He was unquestionably brilliant at his subject, but he was incapable of communicating it to us normal kids.

The problem is that some people are natural born writers. Fluency with words is built into their genetic makeup. People like that learn basic grammar and style principles by osmosis. They rarely remember working to grasp basic writing concepts. And while that’s good for them, it leaves them at a disadvantage when they are asked to teach someone else. Someone normal.

“You people are freaks. You are weirdos. You are not normal. Your kids — the ones who write only because you make them, who wrestle for every sentence and long just to be finished — they are the normal ones. For the good of your sanity and your children’s education, please understand that.”

They chuckle, but I’m serious. Innately gifted writers are the exception, and they have to understand that being naturally talented is often a disadvantage for teachers.

The art of teaching (and coaching) is to make a craft like writing rationally comprehensible to students. There is a bit of empathy required. Good teachers are constantly asking, “How can I make this concept clear to my student?” And going back to when it first became clear to them is a good place to start. But if it’s always been clear, where do you begin?

I sure hope that Mr. Chang moved on from teaching math to a job where he actually used math. If so, I’m sure he’s a happier and less bewildered man.

I’d love your responses here. Anyone relate to the handicap of being a natural writer? Do you  find it hard to teach what comes easy to you?

Why Computer Programs Will Never Replace Writing Teachers
Do You Overcorrect Your Kids’ Spoken English?