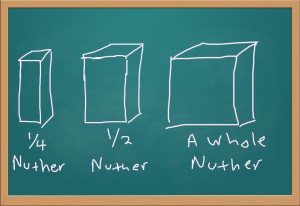 I often hear people using the expression “a whole nuther.” As in: “That’s a whole nuther thing.” A local football coach was quoted in the paper using it recently. No dictionary I know includes nuther. I don’t believe anyone who uses the expression would even argue that nuther is a legitimate word.

I did a little web research and found some interesting discussion of this odd construction. One these two theories seems to explain it:

1) Infixation: The modifier whole is inserted in the word another. This is a linguistic phenomenon called infixation, which most commonly occurs in expletives. Mild examples would be “abso–bloomin–lutely,” or “guaran-darn-tee.” There’s a country song I heard recently about a girl from “Ala-freakin’-bama.”

2) Reanalysis: The other theory is that people confuse another with a nother, and are simply applying the adjective whole to the second word. This sounds odd, but it’s a linguistic occurrence called reanalysis. It’s how we now have the word apron. It derived from the french word naperon. People misconstrued “a naperon” as “an aperon.” Crazy, but true.

Either explanation works for me, but it was interesting to learn, by just doing some Googling, that it’s a matter of some debate.

The question remains, of course, whether “a whole other thing” or “another whole thing” are adequate replacements for “a whole nuther thing.” Should we just accept it as common usage?

New Video Post: “I Am Not A Noun!”
The Simple Pleasures of Spam

Leave a Reply to Kara Click here to cancel reply.