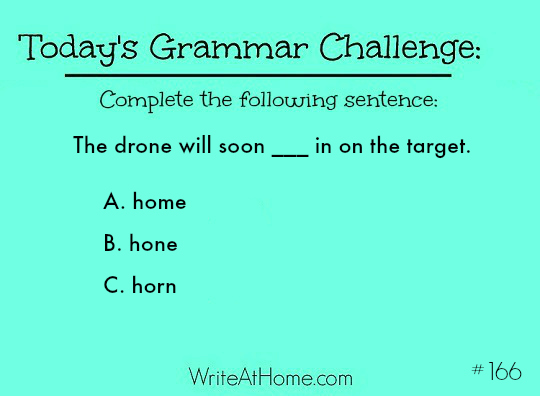 Most of the folks who posted their answer — by a large margin — chose B, hone. These folks tend to be unusually bright in matters linguistic, so I was surprised to see so many wrong answers. The correct answer is A, home. But I have a feeling it won’t be the single correct answer for long.

Hone means “to sharpen.” It derives from an Old English word with Germanic origin meaning “stone.” The connection is clear, since metal implements were sharpened on stones.  Home, on the other hand is a fairly recently formed verb. It comes from the training of pigeons to fly to a prescribed destination. It’s first use in print, according to the OED, was in 1877. It started to occur in military terminology in the 1920s. The phrasal verb form home in on only showed up as recently as the 1950s. It means “to draw close to or be guided toward a target.”

Home is the logical and clearly correct verb here. Bombers want their weapons to strike home, so they home in on their targets. Sharpening things or the use of stones doesn’t seem to have any logical connection, so it’s a mystery that people started substituting hone for home in this usage. The first known published error was in a George Plimpton article in 1965. George W. Bush was derided for speaking of honing in on targets in 1980. Other than the very similar sounds and the relative obscurity of the idiom, I can’t think of a good reason for the confusion, but it certainly exists.

A quick look at Google’s N-gram viewer shows that published writers are increasingly likely to use hone in on rather than home in on. The search only goes as far as 2008.

Notice that the lines for home/homed/homing in on had already begun falling in the early 2000s while hone/honed/honing in on are rising. Based on the answers on my Facebook question, I wouldn’t be surprised if a more recent graph would show them crossing entirely.

My three dictionaries, Merriam-Webster (2014), American Heritage (2011), and Oxford American (2010), all include some note related to hone in on. The most recent one, Merriam-Webster, includes a separate reference for hone in with a usage note explaining that though its popularity is growing, it is still considered erroneous by many experts.

This seems to be a perfect example of English evolution in action. Purists might fight the change, arguing that hone in makes no sense, but it seems the tide is turning regardless. We might not like it, but widespread mistakes often create new words. And when a majority of people over time use hone instead of home, no amount of logic will change it. Dictionaries will eventually acknowledge the usage.

For now, I’ll stick with home in, but we should get used to the idea that hone in is destined for legitimacy.

Post your comments below. I love to hear from readers!

A Lot or Alot? If You Can’t Remember, It Doesn’t Mean You’re Dumb
Word Pairs that Repeat Themselves