Search
Home / Blog / A Lot or Alot? If You Can’t Remember, It Doesn’t Mean You’re Dumb 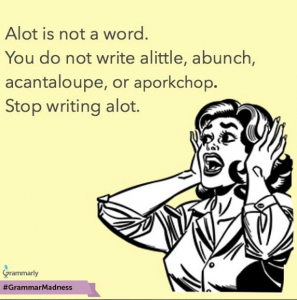 I know this little e-card meme is just supposed to make me laugh. But it bugs me.

The tone exemplifies what I dislike most about grammar snobbishness. Why would anyone be even a little bothered by someone eliminating a space between a and lot?

And that’s what the humor here is supposed to be getting at. This meme says, “We good spellers of the world are sick of all the ignorant, careless spellers out there who think alot is a real word! Ha! Pshaw! Harrumph! Their ignorance is so annoying! But not really. We’re bigger than that. We can laugh at their stupidity with clever memes! You see, for us good spellers, its obvious that a lot is two words. People who can’t remember that are so dumb.”

The thing is, it’s just not so obvious. Not even to normal, intelligent people.

The analogy in the meme is mostly silly. For those who can’t remember whether a lot is one word or two (almost entirely young writers from my experience), the comparison to a little admittedly works pretty well. You wouldn’t write alittle so you shouldn’t write alot. Both words are used as adverbs:

I like ham sandwiches a little, Bob likes them a lot.

But acantaloupe? aporkchop? If those examples are supposed to reveal how ignorant writers of alot are, it doesn’t work. They are nouns with introductory articles, not adverbs. There’s no logical correlation.

Sure, lot can be a noun too: A lot is a plot of land. But nobody confuses alot for a lot in this kind of usage.

Young people confuse them because a lot of adverbs start with a where a could be misunderstood to be an article: again, aboard, anew, afresh, aloud, around, askew etc. These words are natural parallels to a lot. We never write a gain, a board, a new or a round. The mistake therefore seems perfectly logical.

The truth is, constructions like a lot, a little, and a few are odd. They function as compound adverbs, but they look like nouns with indefinite articles. They act like single words, and we have lots of adverbs that were formed by mashing compounds into single words: already, altogether, meanwhile, moreover, etc. A lot is quirky and idiomatic and therefore naturally confusing.

I’m not suggesting we should accept alot as an alternative spelling. I’m just saying the confusion is perfectly rational. More rational, in fact, than the dumb analogy in this meme.

I know. It’s only a comical meme. I’m surely taking it too seriously. I just don’t like humor that reinforces the general condescension of grammar snobs.

I have created some revised versions of the meme below. I like these better. 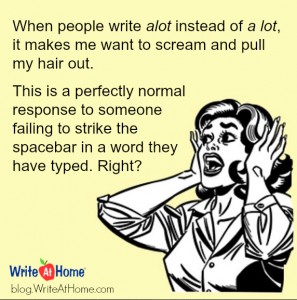 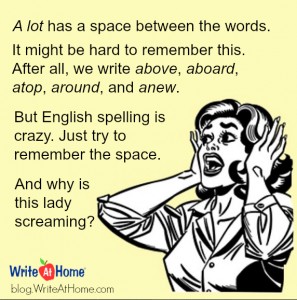 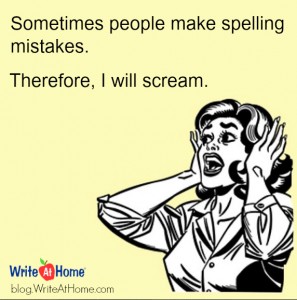 Acronym or Abbreviation?
It’s Not “Hone In,” It’s “Home In!” At Least For Now…

Are You a Grammar Nazi? Take the Quiz To Find Out