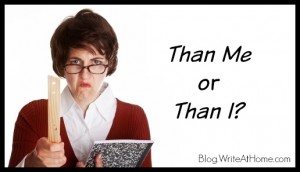 Nobody blogs better than me.

Or should that be …better than I?

Believe it or not, this question has been debated for centuries, and even though grammar experts seem to have arrived at a consensus, strangely enough, everyday speakers of English tend to violate the rule more than they obey it. What’s up with that?

First, understand that I’m not talking about this kind of sentence:

This is an ambiguous kind of sentence, but the pronoun you choose can help clarify what you mean. If you want to say that Ed’s a bigger bowling fanatic than you are, you should use the nominative case pronoun I. That way you are saying…

If, on the other hand, you are trying to communicate that given a choice between bowling and you, he’d take bowling, you should use the objective case me. That way you are saying…

But what about more typical uses of the comparative than — like the one I started with: Nobody blogs better than (me/I)? Sentences like this can only mean one thing. Which is correct?

These days most usage guides and grammar books will tell you to use the nominative case pronoun after the comparative than: I, he, she, we, they. The reason is that this kind of sentence is assumed to contain an elliptical clause — a clause with words missing that the reader infers from context. When we read ...more than I, we assume it means …more than I do. Or, in this case, …more than I blog.

In this way of looking at it, than serves as a conjunction linking the two clauses: Nobody blogs better and I (do). Since that makes the pronoun the subject of the verb, we need the nominative case. Simple.

If we accept this explanation — and it’s the most common one around today — we should almost always use the nominative case pronoun after than. The only exception would be in rare sentences like the second bowling example above.

Google’s N-gram viewer shows that than I appears far more frequently than than me in publications over the past 200  years. This seems to confirm that this is the right answer, right? Well, I suppose so, but how do you explain the fact that everyday speakers of English — at least in most parts of America — are far more likely to say than me in conversation? Why does than I sound a bit uncomfortable, a bit stilted? Don’t these sentences sound natural and common?

Can we really say all these sentences are wrong? Many do, but they are probably unaware of the other way of looking at the word than.

Way back in the 1700s, one of the first men to write about English grammar — a Church of England Bishop named Robert Lowth — argued that than in sentences like this was used as a preposition, not a conjunction. He would parse my original sentence this way:

me (object of the preposition than)

This way of looking at it means that than me works as a prepositional phrase modifying the adverb better.  And, of course, if the pronoun here is the object of a preposition, then you need the objective case pronoun me.

Both ways of looking at this sentence make perfect sense grammatically, and that’s why I don’t consider it wrong to use the objective case pronoun after the comparative than. Others will disagree, however, and many authorities will declare it wrong. You should know that before you use it in formal writing. You will probably be better off sticking with the currently popular way of looking at it than the analysis of Bishop Lowth. But at least you can take comfort in knowing that you probably know more about this subject than the ordinary grammar critic does.

Categories: Grammar and Usage Tags: comparative sentence, conjunction, English, grammar, preposition, than I, than me

What I Learned about Public Education from Subbing
Heteronyms: Different Words that Look the Same