Search
Home / Blog / What’s the Deal with Copywork and Dictation?

What’s the Deal with Copywork and Dictation? 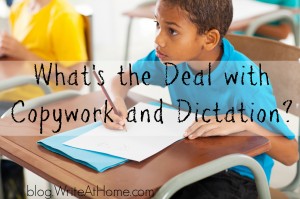 There are many approaches to teaching writing to young students, but I like to think of them all as falling along a spectrum between what we might call the systematic/incremental approach and the organic/creative approach. Most teachers and curriculums fall somewhere between the two, but it’s normally easy to see toward which side they lean.

Keep in mind that no single approach works well for all students. I have encountered many families who swear by the success they found with very formal, structured programs and just as many who found that approach a stultifying failure. The important thing is to know your students and what works for them. I intend to write more on this idea another time, but today, I’d like to address the strategy of copywork and dictation currently popular among many homeschoolers. It is a practice that falls on the systematic/incremental side of the spectrum.

Copywork involves giving young writers a variety of well-crafted passages and asking them to copy them by hand with exactness.

Dictation is reading passages aloud and asking students to write what they hear with attention to spelling, capitalization, punctuation, and other conventions.

Systematic/incremental writing curriculums — particularly those influenced by the classical approach — suggest starting the youngest writers with copywork, beginning with simple, single sentences and moving toward complex paragraphs. Once students are able to consistently copy the passages accurately, you can move on to dictation — an exercise that requires considerably more from them.

Copywork and dictation are designed to precede the composition of original works, though some curriculums allow for capable students to do both if they are comfortable and confident doing so.

Opponents of copywork and dictation — usually those who favor the organic/creative approach — argue that the practice is so dull and unimaginative that it leaves naturally creative students with a bad taste in their mouths. It smacks of the kind of rote drilling you associate with schooling in Dickens and Twain novels. Students, they argue, should be free to tell the stories that come so naturally to young minds without concern for exactness and conventions. That kind of stuff, they say, can come later. Opponents of copywork and dictation believe that sparking the imagination and engendering a love for creative expression is more important for beginning writers than proficiency with minutiae like proper spelling and punctuation placement.

Support for Copywork and Dictation

Advocates for the copywork-dictation method, like Susan Wise-Bauers, make a good case. They argue that writing is an amazingly complex activity involving multiple cognitive processes that adult writers take for granted. What seems like a simple enough exercise for an experienced writer — say composing an original descriptive paragraph — can seem an overwhelming task to a six or seven-year-old.

This is because so many aspects of writing that are instinctive to mature writers require intense, conscious effort for the young. No adult has to think about how to shape letters or how much space to put between words. Capitalizing the first letter of a sentence and ending it with a period are automatic habits that have developed over time. We don’t have to think about spelling the vast majority of our words or how to craft grammatically sound sentences. These things have ingrained themselves into our brains through years of experience.

But young writers have none of this experience. For them, every aspect of writing — from forming the ideas to express to finding the words and syntax required to express it, to the shaping of the letters and even the proper grip on the pencil — requires concentrated effort.

The theory behind copywork and dictation is that it allows students to focus on just a few of the most fundamental aspects of writing — the parts that experienced writers do unconsciously. With copywork, the ideas and words are provided them. Even the spelling and punctuation are right in front of them. They need only concentrate on the physical manipulation of the writing implement, on shaping the letters, measuring the spaces, on reproducing exactly what they see. Dictation comes when facility with these physical skills has been demonstrated. It is the next step in the process, providing students with the ideas and words, but forcing them to remember conventions like spelling, spacing, and punctuation that are not provided. They have some decisions to make (Should I put a comma here? How do I spell that word?), but all creative decisions are made for them.

This practice, unexciting as it seems, allows young writers to gain experience with the basic physical skills of writing, minimizing the decisions they need to make, and allowing them time to develop the habits that adult writers have already acquired. All this happens before we ask students to compose papers that require not only writing skills, but creative, syntactical, and grammatical decisions as well.

The thinking goes that once many of these rudimentary habits of writing become ingrained, students are then able to take on responsibility for the content and creative aspects of writing with less concern for the technical, mechanical aspects.

I don’t know if any research has been done on the effectiveness of copywork and dictation, but the thinking behind it seems to make sense. That’s not to say that I think it will work well for all students. I believe the spectrum of approaches exists because students are unique. Wise teachers — both the homeschool and classroom varieties — discover and apply which approaches work best with their kids.

My first instinct was to reject the copywork/dictation idea, but it makes too much sense and is applauded by too many homeschooling moms to do that. Instead, I recommend giving it a try — particularly if other approaches have been unsatisfying.

I’d love to hear from you. Tell me what you think in the Reply section below.

Is “Alright” All Right?
Our Awesome Homeschool Graduation Ceremony