Search
Home / Blog / Toward or Towards? 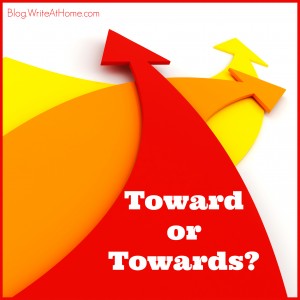 I am a grammar nerd, but I’m not a grammar snob. In fact, I am more irritated by the unfounded arrogance of self-proclaimed grammar cops than I ever am over the common typo or syntax error. Too many grammar snobs are convinced of rules that either never existed in any real sense or that have clearly changed over time. This latter concept tends to really bother them. They think it’s a sign of the degeneracy of our culture. It is somehow evidence of societal collapse — that culture is falling apart at the seams.

But, I tell them, language always changes over time. It evolves and grows along with culture. Every generation tends to pine for the good old days and that goes for the linguistic customs of the good old days too, but change in syntax, vocabulary, and idiom isn’t necessarily a bad thing. Is it a tragedy that we no longer say thee and thou? Or that nobody uses words like puissance, grammarcy, or wherefore anymore? I don’t think so. Change can be for the worse, certainly, but it can also be for the better. Writers and poets have made works of power and beauty in every century and every phase of language development. Part of the pleasure of our language is that it is pliable and organic.

A simple example is the common preposition toward. There is often confusion over whether toward or towards is correct. But they both are. They are interchangeable. Publishers of British English have tended to prefer towards. Americans switched around the turn of the previous century, beginning, for some unknown reason, to eliminate the s. Some have insisted that this is the “proper” way to use the word, but there is no reason to think so. English speakers around the world use both, even if American editors like one and British editors like the other.

The point is, in America, preferences changed suddenly in the final decade of the 19th century:

The British stayed roughly the same:

What does this mean? Nothing, really. Just that language is often arbitrary and unpredictable. Sometimes it changes, and sometimes it doesn’t. Personally, I find that wonderful and fascinating rather than terrible and frightening. And that’s the difference between a grammar nerd and a grammar snob.

Please feel free to leave your comments in the Reply section below.

Categories: Fun with Words, Grammar and Usage Tags: grammar, language, toward, toward or towards, towards

Quick Review: The Verb Tenses
Use Figures of Speech Like Metonymy and Synecdoche