Search
Home / Blog / Aggravate: To Annoy or To Make Worse? 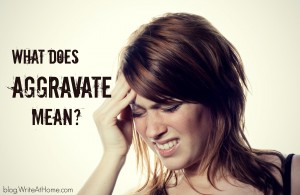 The primary definition of aggravate in most dictionaries is “to make worse, more serious, or more severe.” Many experts over the years have objected to the use of aggravate as a synonym for irritate, annoy, or bother.

Merriam-Webster’s Dictionary of English Usage notes that the first to object to the “irritate” use of aggravate was Richard Grant White in 1870. Others to condemn this usage include John Stuart Mill and Ambrose Bierce, to name a few. In fact, over the years, people have gotten quite worked up about it.

Fowler’s Modern English Usage originally fought the fight as well, but in its 1965 edition, it confesses that “usage has beaten the grammarians” and that aggravate has come to be accepted as interchangeable with annoy and irritate.

Like it or not, aggravate, even in formally published writing, more often means “annoy” than “make worse.” And this is not a new trend. Despite all the objections, MWDOEU asserts that aggravate was first used to mean “make worse” about 1597, but by 1611 was already being used in the “irritate” sense in published works. That’s more than three hundred years of aggravate meaning “bother” and not just “worsen.”

That doesn’t mean aggravate doesn’t still mean “to make worse” or “exacerbate.” That original definition remains and is still primary in most dictionaries. It’s just that the word has clearly added a secondary and related meaning.

I’m sure this news will aggravate some of you. 🙂

Finish What You Write
The Three C’s of Strong Writing

What Does “Sequester” Mean?