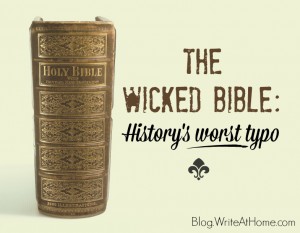 We all make typos occasionally, right? We may have to deal with readers griping about a left-out apostrophe or some inverted letters, but generally speaking, there’s no harm done.

Well, some typos are worse than others. That was the lesson learned by printers Robert  Barker and Martin Lucas in 1631, who win the prize for the most scandalous typo in history.

All they did was leave out one three-letter word: not. Unfortunately, they left it out of the 7th Commandment in Exodus 20 in a reprint of the King James Bible. That means their version read:

No one knows exactly how many copies were run, but they destroyed as many as they could when the error was discovered. They didn’t get them all, however, as several editions of what has come to be known as the Wicked Bible, the Adulterous Bible, or the Sinner’s Bible still exist. One is in the rare books collection at the New York Public Library. Another is in the Dunham Bible Museum in Houston, Texas.

Barker and Lucas were deprived of their printing license and were fined £300, the equivalent of  about $72,000 today. They were also publicly excoriated by Charles I and the Archbishop of Canterbury, who said,

I knew the time when great care was had about printing, the Bibles especially, good compositors and the best correctors were gotten being grave and learned men, the paper and the letter rare, and faire every way of the best, but now the paper is nought, the composers boys, and the correctors unlearned.

Basically, what he’s saying here is, “Back in MY day, people CARED about the stuff they published. Kids today have no respect for the English language.” Sound familiar?

Hast thou a comment to maketh? Leaveth it below!

All information in this article is via: