Search
Home / Blog / The Difference Between “Latter” and “Former”

The Difference Between “Latter” and “Former” 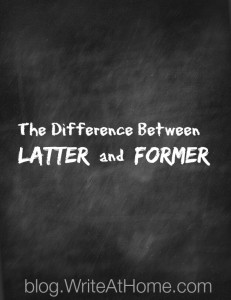 If you can’t decide between seeing a movie or waiting until you’ve read the book first, take my advice and go with the latter. If you choose the former, you will usually regret it.

Sentences like this confused me when I was a young reader. What the heck is the latter? The former? Those weren’t among the options! In time, I learned what the writer was talking about, but it caused me some unnecessary discombobulation in the meantime. I write this post in hope of helping you avoid any such discombobulation¹.

It’s simple. Former means “the first of two” and latter means “the second of two.” Notice that you should use these terms when speaking of only two previously mentioned items. If the options include three or more, former and latter do not apply.

The easy way to remember the difference between the two is by the first letter. Former means first and latter means last. Get it?

Of course, I’ve always wondered why writers don’t actually just write first and last or first and second rather than former and latter. I suppose it sounds a bit more erudite.

Feel free to use the terms in your writing, but I advise restricting it to formal papers — especially papers where the reader might be impressed by the correct use of such terms. But in everyday writing, I think you should avoid them. Even when the reader is clear on what they mean, they nearly always require him or her to back up and reread the options. That seems to impose extra work on the reader. Be nice to your readers.

Oh, and only use them in written communication. When you are speaking, listeners can’t back up and review the options, so it is even more likely to cause confusion. Or worse — discombobulation.

¹I love the word discombobulation. Can you tell?

Do you have a comment or a question? Feel free to state the former or ask the latter in a comment below.