Search
Home / Blog / Hey Brian: Why No Apostrophe in Possessive Its? 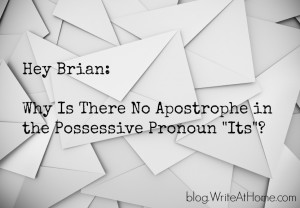 I received the following question recently on our Facebook page:

I have a question that I can’t seem to find the answer to, and I was hoping someone here might be able to help me. How come “its” doesn’t have an apostrophe when it is used to display something or someone owning an item? Example: The door held firm, refusing to let anyone pass its threshold. Although I am describing the door’s threshold, the its doesn’t have ownership. Is there a reason for this? Or just an English quirk?  –Kyle

I understand the confusion, though I’d never thought of it this way: If you would say the door’s threshold, why wouldn’t you also say it’s threshold? Here’s my reply:

It’s not a quirk at all, Kyle. In fact, it’s perfectly consistent. Unlike nouns, which become possessive by adding apostrophe-s (or s-apostrophe), pronouns have a distinct possessive form. We call it the possessive case (as opposed to nominative or objective case). Possessive case pronouns show possession without apostrophes: my, your, his, her, our, their… and its. In other words, pronouns are different from nouns in how they show possession. Don’t compare its to door’s, but its to my, your, his or her. This comes in handy, by the way. If we didn’t have this class of possessive pronouns, and used apostrophe-s with pronouns as well as nouns, we wouldn’t be able to distinguish the possessive it’s from the contraction it’s.

I’d love you hear your comments or questions. Please leave them in the Reply area below.

Categories: Grammar and Usage Tags: hey brian, its, its or it's, reader question